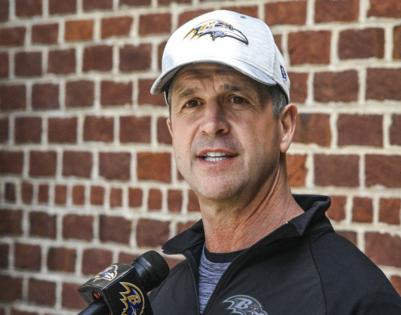 BALTIMORE — Ravens quarterback Lamar Jackson, who is entering the final year of his rookie contract, was absent for the second straight day of voluntary organized team activities on Wednesday.

When coach John Harbaugh was asked on Wednesday whether Jackson would attend OTAs, he said, “I’ll let Lamar speak for himself on this topic.”

Jackson, the 2019 NFL Most Valuable Player who is skipping the voluntary workouts for the first time, attended OTAs last season after the Ravens picked up the fifth-year option of his rookie contract, which is worth $23 million under the NFL’s collective bargaining agreement. There’s been no progress in negotiations for a record-breaking extension for Jackson, who is representing himself without an agent.

General manager Eric DeCosta said after the draft that the Ravens have gotten “great reports” on Jackson’s offseason workouts; he’s trained with private quarterback tutor Adam Dedeaux, whom he worked with last year, as well as a South Florida-based trainer.

Jackson isn’t the only star quarterback in the league that’s missing from OTAs. According to ESPN, Arizona Cardinals quarterback Kyler Murray will not attend OTAs but is expected to attend mandatory minicamp June 14-16. Murray, who also had his fifth-year option picked up, has been seeking a long-term extension.

Tight end Mark Andrews said he’s not worried about Jackson’s absence. The two-time Pro Bowl selection has stayed connected with Jackson, who he said is “extremely motivated and hungry.”

“We all are working and doing our job here and getting ready for him,” Andrews said. “I’m confident that he’s going to be ready and show everybody what he’s got.”

Jackson, who was named to his second Pro Bowl after throwing for 2,882 yards, 16 touchdowns and 13 interceptions in an injury-shortened 2021 season, posted on Twitter on Tuesday his eagerness to return to the field saying, “Can’t wait to get back.”