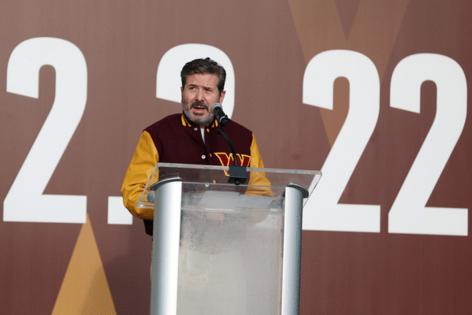 PHILADELPHIA — The reactions to Daniel Snyder tell you all you need to know about the priorities of the NFL.

Snyder is the worst owner in sports, and he doesn’t try to hide it. Now, though, the Football Billionaires Club is considering expulsion, but not for the reasons any decent person might think.

Snyder’s been accused of skimming the profits, which, apparently, is far worse than creating a toxic workplace, partaking in two bogus investigations, and obscuring the results from public view — all with the league’s implicit blessing. From concussion cover-up to protester demonization, the turpitude of the NFL owners knows no bounds. Just don’t mess with their money.

Daniel Snyder’s style has been poisonous, but it looks like a minor scam might end his days as an owner.

It’s like Al Capone landing in Alcatraz for tax evasion.

Snyder oversees a team that has been accused of rampant, consistent sexual misconduct and abusive behavior that had occurred both with Snyder’s knowledge and/or by Snyder himself.

NFL owners should have forced Snyder to sell in 2021, when, according to a report by a Washington radio station, the league’s investigator recommended he be forced to sell. But the NFL isn’t exactly known for its inclusive, nurturing environment: Consider that only five franchise owners — of the Vikings, 49ers, Falcons, Steelers, and Jeffrey Lurie and the Eagles — can even be considered moderate in their politics, as opposed to the oppressive conservatives Colin Kaepernick exposed the rest to be.

His fellow owners’ collective response to the investigation: Meh.