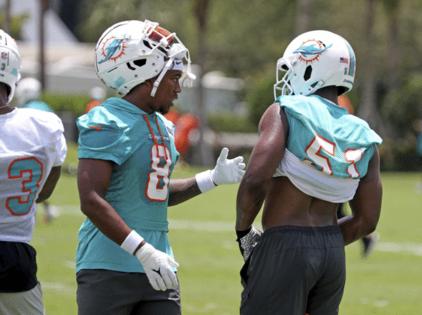 MIAMI GARDENS, Fla. — It was a typical sled drill that a linebacker has probably done 500 times in his career.

Wait for the coach to snap the ball to charge the sled, lift the makeshift offensive player in the air for a couple seconds before shedding it to whatever side the coach signals, then charging and tackling the pop-up dummy 5 yards in the backfield.

Jerome Baker, who has led the Miami Dolphins in tackles three straight seasons, walked up to Channing Tindall and gave him a few pointers before the rookie’s turn arrived.

Tindall, a member of Georgia’s national championship team who the Dolphins are hoping can have an immediate impact as a third-round pick, nodded his head as if he understood. But when the ball was snapped, he clumsily went through the drill.

Baker quickly approached him with a review and some more pointers.

The veteran linebacker then jumped into the line and ran through the drill himself one more time with Tindall watching closely.

“He’s going to be a great player. He’s just got to, [like] any rookie, just try to soak in as much information as you can,” said Baker, who found himself in a similar position in 2018 as a third-round pick, learning from Kiko Alonso and Raekwon McMillan.

“[He needs to] remember you got to this point by playing football. It’s not that hard when you think about it. It’s still football like it was when we were younger,” Baker continued. “He’s got a lot of things to improve on but he definitely has potential.”

And it’s on the veterans like Baker to help bring out that potential by passing on wisdom and sharing their knowledge from past experiences.

At least it is for teams that have a good culture.