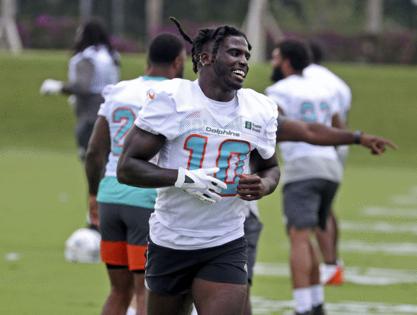 The Miami Dolphins coach avoided the team-issued gear and wore spring’s hottest colors to the NFL combine, and accented that wardrobe with Burberry sneakers and a Louis Vuitton backpack hanging over his shoulder the entire week.

Then there’s the array of Yeezy sneakers that would impress any and every NFL player, even those with a stellar sneaker collection of their own.

“There’s a good amount,” McDaniel said Tuesday when asked about his collection of Yeezy’s, an expensive and hard to get Adidas sneaker created by musician and designer Kanye West, which the coach wears regularly.

“I’m trying to overcome my personality shortcomings,” McDaniel joked in a deadpan nature after pointing out his entire wardrobe has finally made its way from California.

His style clearly catches your attention.

Let’s hope the Dolphins offense, which is what McDaniel was hired to fix, features the same kind of fashion-forward approach because turning that unit into the upper echelon of NFL productivity, is the easiest way to make this franchise relevant again.

And it is McDaniel’s job to set that trend.

“He’s a super genius,” said receiver River Cracraft, who spent time with McDaniel with the 49ers. “That’s all you need to know. He’s smarter than everyone else. And no offense to everyone else.”