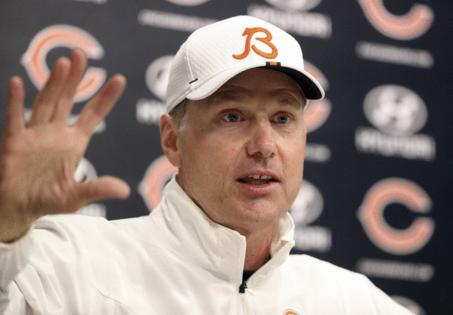 CHICAGO — The Matt Eberflus era in Chicago officially will begin when the Bears open their season against the San Francisco 49ers on Sept. 11 at Soldier Field, according to the 2022 schedule the team released Thursday night.

The new Bears coach then will get his first taste of the rivalry with the Green Bay Packers when his team visits Lambeau Field for “Sunday Night Football” in Week 2.

The Bears are slated to play three prime-time games in the first seven weeks of the season — the Packers game, a “Thursday Night Football” contest against the Washington Commanders at Soldier Field in Week 6 and a “Monday Night Football” game the following week against the New England Patriots in Foxborough, Mass.

A game against the Dallas Cowboys at AT&T Stadium follows in Week 8, closing out an October with four road contests.

The home schedule is stacked late in the season, when the Bears play only one road game over the final six weeks — a Jan. 1 game against the Lions in Detroit. That means the Bears won’t be playing in the Thanksgiving Day game at Ford Field, which was on their schedule three of the last four seasons.

December and January home games include Week 13 against the Packers, a Christmas Eve game against the Buffalo Bills in Week 16 and the season finale against the Minnesota Vikings.

PITTSBURGH — The Steelers might not win many games in 2022, but it won't be because of a lack of confidence.

This was Cam Heyward on the Mina Kimes podcast last month when asked how he feels about being on the second ...Read More

The NFL may be kicking off its summer hiatus, with teams off until training camp begins in late July,

But that doesn’t mean the ever-churning NFL rumor mill has stopped.

And Wednesday afternoon brought another one ...Read More