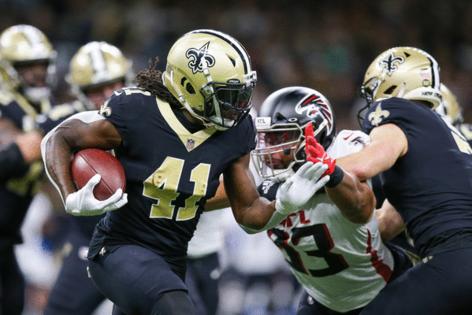 For the Jets (3-9) to have any chance of salvaging something out of another miserable season they need the defense to play better in this final five-game stretch, especially against the run.

First up are the Saints (5-7), who have struggled offensively since Jameis Winston suffered a season-ending ACL injury against the Tampa Bay Buccaneers in Week 8. Post-Winston, the Saints have averaged 19.6 points per game with Trevor Siemian and Taysom Hill under center.

But the Saints were without four-time Pro Bowler and two-time second-team All-Pro running back Alvin Kamara, who suffered a knee injury in Week 9.

Kamara is expected to play on Sunday at Metlife Stadium. And he’s capable of shredding a defense on the ground and with his pass catching. He has 530 yards rushing in eight games with three touchdowns and 310 yards receiving with four scores. The Saints also have Hill starting, who’s a dual-threat quarterback.

So this week for Robert Saleh’s club will come down to stopping the Saints rushing attack that’s averaging 114 yards on the ground, 14th in the NFL.

Saleh paid his utmost respect to Kamara on Wednesday and knows the game plan centers around stopping the star running back.

“He’s one of the best. He’s got tremendous contact balance, he’s a savvy runner, he’s very smart, he’s great out of the backfield in the pass game,” Saleh said. “So, I’m sure they’re excited to get him back and get him back involved, especially down the stretch for them.… I know they’re really champing at the bit to get him going and to try to feed him the rock. Having him back, he’s an issue, but something that we’ve got to be excited about attacking.”

The Jets’ defense will have their hands full as they try to snap out of the funk they’ve been in since Week 5 and a lot of their issues stem from not being able to stop the run.

“It’s definitely a component to it. You have to eliminate some part of an offense and try to make them as one dimensional as you can,” Jets defensive coordinator Jeff Ulbrich said on Monday. “We have not done that well enough by any means. There are games where we’ve played the run well, there’s spots within games we played the run well, but just consistently as you really look at the season as a whole, not defending it as well as we need to, to be successful.