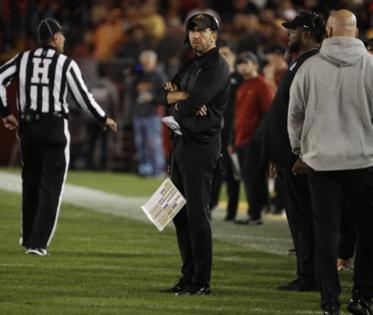 “Coach [Dabo] Swinney has been a great resource for me,” said Campbell. “For a young coach that I am, I believe you are always searching for people in our profession that are doing it the right way and they’re leading from the heart.”

Campbell, 42, is finishing his sixth season at Iowa State, where the Cyclones have gone 42-33, including five straight bowl appearances. He previously spent five seasons as the head coach at Toledo, where the Rockets were 35-15.

“It was a transformational experience for myself because of what I saw when I got to Clemson,” he said. “The kindness, the care, the love and the passion that Coach [Swinney] led with and continues to lead with, that was a huge eye-opening experience of man, you can lead a football program the right way.”

Said Swinney: “The first time I met him, we were crossing paths at an airport. I was immediately struck with his authenticity, who he is and I’ve admired what he’s done at a place where it’s not easy to do what he’s done. He’s built an incredible culture there.”

Mentor and mentee will face off against each other for the first time as Iowa State (7-5) takes on No. 19 Clemson (9-3) in the Cheez-It Bowl on Dec. 29 at Camping World Stadium.

Swinney, 52, has spent 14 seasons as the head coach at Clemson, where he’s developed the Tigers into one of the dominant programs in college football. Clemson is coming off six straight ACC Championships, six appearances in the College Football Playoff and two National Championships (2016, ′18).

“He’s been from afar a great mentor and certainly the time that he’s given to me throughout my career, I’ve been greatly appreciative of,” said Campbell.

Said Swinney: “He’s an incredibly bright coach, a guy that loves the players and is very serious about certainly winning but winning in a way that builds great men through the process.”

While his name may have come up in speculation surrounding several college coaching vacancies across the country the last few weeks, Campbell reaffirmed his commitment to Iowa State.

“There’s been a lot of things said,” he said. “When you go back to my belief system, it’s been your actions speak louder than your words. Even from my end for the last six years, I’ve said and followed through with the same actions.