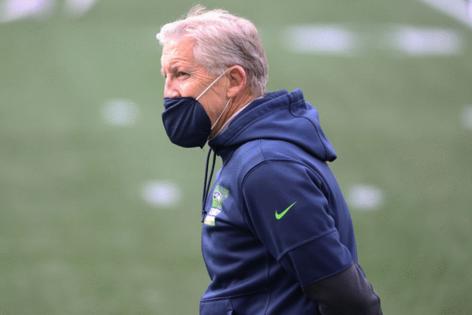 SEATTLE — The Seahawks have resided in the upper echelon of the NFL for so long, and have been relevant with such regularity, that it’s easy to think it’s a birth right. A guarantee. A given.

But really, it’s not. Those double-digit win seasons year after year, the playoff berths each January, they will eventually run their course. Reality hits every team. Some fend it off longer than others; but it’s just a matter of time. There’s more than one reason “NFL” is said to stand for “Not For Long.”

It’s far from a given that the Seahawks are going to work their way out of their current plight, a 2-5 record after Monday’s 13-10 loss to New Orleans that puts them near the bottom of the NFC. And if they don’t, it would be naive to think you can just write this off as a fluky, aberrational season and assume they’re going to pick right up where they left off next year.

Without him they are just another team — and not a particularly good one. With him they have a chance in every game, most notably the ones that go down to the wire with the outcome in doubt. That is where Wilson’s magic is particularly potent. He doesn’t pull it out every time, but often enough to see the contrast when they hit crunchtime and fizzle, as has been the case for three weeks since Wilson’s finger injury.

There has been on ongoing debate in the NFL about who is more vital to a team’s success, a dynamic coach or a franchise quarterback. Certainly, the paths of the New England Patriots and Tampa Bay Buccaneers with and without Tom Brady gives a strong indication. And Seahawks coach Pete Carroll was blunt Monday when asked how much they miss Wilson in close games like Monday’s.

“Let’s say it this way: I’ve been here a long time. And if we didn’t have Russell, I probably wouldn’t have been here a long time. Because think of all the magic that he’s created in the years. He’s got numbers and stats, and fourth quarters. … One of the winningest quarterbacks in the history of the NFL. And it will be really fun when he comes back and plays football again for us this year. And we owe a tremendous amount. You can see how hard it is.”

That was not meant as an indictment of Geno Smith, who is thrown into a nearly impossible situation as a backup quarterback shaking off years of rust. But in each of the past three games, the Seahawks have had a possession at the end of the game with a chance to win. But Smith couldn’t engineer the victory. There was an interception against the Rams, a fumble in overtime against the Steelers, and a drive that ended in two sacks and a desperation incompletion Monday.

As mentioned, Wilson isn’t infallible in those situations. With him at quarterback this season, the Seahawks were held scoreless in the second half of a tight game with the Vikings. And in an overtime loss to Tennessee in Week 2, Wilson got the ball in OT with a chance to win with just a field goal. The drive resulted in two incompletions, a sack and a punt — and the Seahawks never got the ball back.

Yet Wilson’s track record in orchestrating comebacks is well-documented — 35 victories when trailing or tied in the fourth quarter, the most in the NFL since 2012 (regular season and postseason).

“Russell’s a factor,” Carroll said. “He’s a fantastic, positive factor and always has been. And, I mean, those (possessions at the end of Monday’s game) were exactly his time. That’s his time. That’s when he shines. And so, we miss him. And in the meantime, we’re going to keep fighting and clawing, and doing everything we can.”

There was a lot of talk from the Seahawks after Monday’s loss about how close they are to turning things around and rescuing their season. But that’s a highly unrealistic viewpoint. At 2-5, with numerous tough games ahead, it would take a true miracle for Seattle to make the playoffs.

The question of whether the Seahawks’ run is truly over is more complicated. You can look at all the narrow victories in recent years and say that was always unsustainable. You can look at the early playoff ousters as an indication that their power was waning. You could look at their drafting woes as a harbinger of tough times. You could argue that Carroll’s conservative offensive philosophy is holding them back.

Still, as long as they have Wilson under center and under contract — which they do through the 2023 season — and he avoids a major injury, they are going to remain a team to be reckoned with.

Maybe the main lesson here is that the Seahawks need to do everything within their power ensure there is no divorce with Wilson in the offseason or thereafter. For without Wilson, there’s no doubt that the demise of the championship era of the Seahawks would be complete, and the rebuilding era would be upon us.