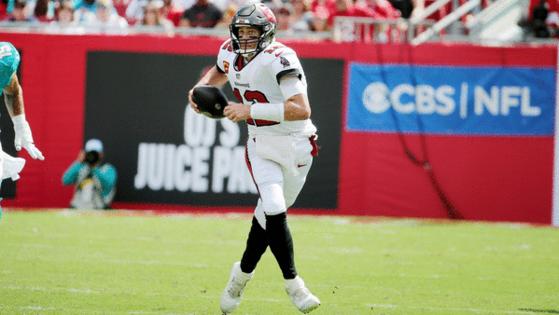 “It scares the hell out of me,” Bucs offensive coordinator Byron Leftwich said Thursday of Brady’s scrambling.

Brady is the greatest quarterback of all time and has always done his best work standing directly behind his offensive line. In fact, while commenting on the few occasions he’s had to run the football this season, Brady’s self-deprecating sense of humor has never been sharper.

Two weeks ago against the Dolphins, after a season-long 13-yard run to set up a field goal, Brady asked for a review. “Do I look faster?” he asked reporters after the game. “I feel fast. Most of the guys in the NFL probably make like 30 yards on a run like that. I turn a 30-yarder into a 10-yarder better than anybody.”

But having undergone surgery to repair a torn medial collateral ligament in his left knee that he played with for all of 2020, Brady is reaping the rewards with improved mobility. Not only is he able to improve his movements to avoid the pass rush with slide steps and climbing the pocket, he’s also buying time for himself and his receivers in the passing game.

Sensing a collapsing pocket on a third-and-2 play in Week 2 against the Atlanta Falcons, Brady escaped and ran for the first down.

Against the Rams the following week, Brady bought some time for himself by sliding to his right and finding tight end O.J. Howard for a first down.

In his return to New England on Oct. 3, the Bucs were caught in a defensive struggle with the ball on their own 9-yard line. Brady rolled to his right, running through the end zone, and fired a strike to Chris Godwin for a first down at the Patriots’ 37. That led to a field goal at the end of the first half.

With the Bucs trailing 14-13 and facing third-and-6 in the fourth quarter of the same game, Brady rushed 6 yards for a first down, spinning the football on his finger as he remained on the Gillette Stadium surface.

Facing third-and-1 at the Dolphins’ 42-yard line the following week, Brady rolled to his right and threw 12 yards to Godwin for a first down.

Clinging to a 28-22 lead and facing third-and-7 last Thursday in Philadelphia, Brady rolled right and fired a 27-yard pass to Antonio Brown for a first down to seal the game.

Of course, none of this has come by accident.

Even at 44, Brady is always looking to get better, to improve something in his game and gain an edge. Every day before and after practice, the Bucs quarterbacks work on their movement inside and outside the pocket.

“We don’t run that much, so I think it’s really important to keep your legs in shape and keep your bend,” Brady said. “You never know when those one or two plays … ultimately, you’re going to have to be out of the pocket and make a scramble play.

“I think you just have to be ready. Some of that is probably not the most natural thing for me, as we know. But at the same time, we made a play out of the pocket on third down the other night that was a big gain, a big part of the game. We’re going to need to make those plays.”

Leftwich says while it likely feels unnatural for Brady to leave the pocket, he’s done a good job of picking his spots.

“I’m just trying to make sure he doesn’t end up doing nothing reckless,” Leftwich said. “I was a guy who couldn’t run, and it is an unnatural feeling when you’re in the middle of the field running with the ball in your hands and you’re not known for running.

Brady agrees. Nobody has a better perspective on the danger that lurks outside the pocket than him. His whole career came to be when Patriots quarterback Drew Bledsoe was blasted near the sideline by Jets linebacker Mo Lewis in a 2001 game. Brady took over just two games into his second season, and the rest is history.

“You know, the problem out there, it’s definitely more susceptible to getting hurt,” Brady said. “There’s no doubt about that. When you get outside the pocket, at least for me, things move pretty fast and you’re less protected. If you’ve got the ball in your hand, they’re trying to get you.”

At times, it stresses out some of his pocket protectors, such as center Ryan Jensen.

“I think sometimes it’s a little bit of a surprise when he gets to running out there,” Jensen said. “But man, he looks pretty quick for being 44. It’s a surprise at times, but the way defenses are playing us a lot he’s got to extend plays at times, and he’s been doing good and he’s executing it when need be.”