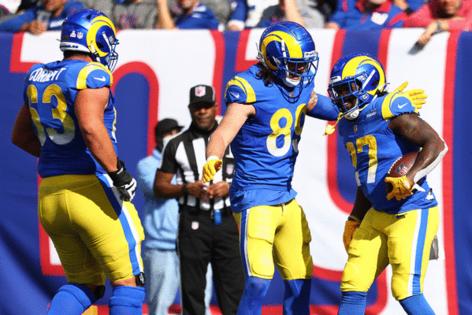 One former player described the scene as “sad” seeing a franchise that once lifted two Lombardi Trophies in five years reduced to this.

Losing Kadarius Toney and Andrew Thomas to first half ankle injuries reduced the already overmatched Giants (1-5) to a shell of an NFL team.

Daniel Jones turned the ball over four times, twice as many as he’d committed in his first four and a half games. The line in front of him, the unit GM Dave Gettleman was supposed to fix four years ago, was a complete mess.

Jones was strip-sacked on Matt Peart’s first left tackle snap in place of the injured Thomas. And one of his interceptions happened because Sterling Shepard fell down on his route.

Meanwhile, Matt Stafford (251 yards, four TDs) carved up Pat Graham’s defense, putting 28 points on the Giants in the second quarter with the help of the Giants’ poor ball security.

The Rams (5-1) are the second straight top NFC team, after the Dallas Cowboys in last week’s 44-20 blowout, to bury the Giants in a laugher.

And it could still get worse.

To assess that, we compared Tagovailoa’s statistics in his ...Read More

PITTSBURGH — Diontae Johnson is the first player on the field before games, but you have to show up pretty early to notice. He's easy to spot, too. Just look for the guy catching tennis balls near midfield.

LOS ANGELES — Now that the first one is out of the way, Odell Beckham Jr. is ready for more.

RENTON, Wash. — The Seahawks on Friday officially listed three running backs as questionable to play due to injury for Sunday's 1:25 p.m. game against the 49ers — Alex Collins, Rashaad Penny and Travis Homer.