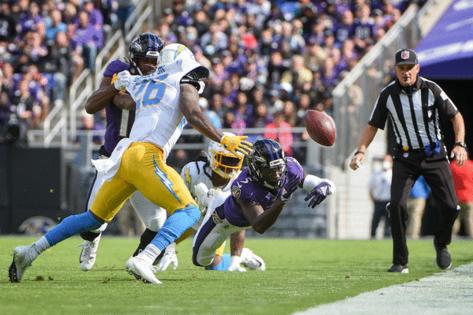 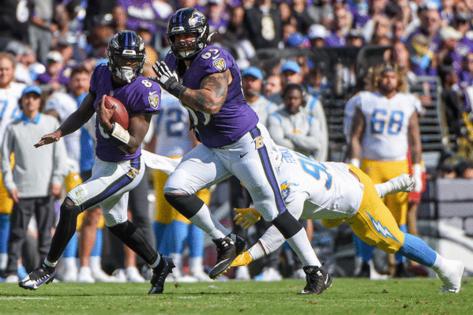 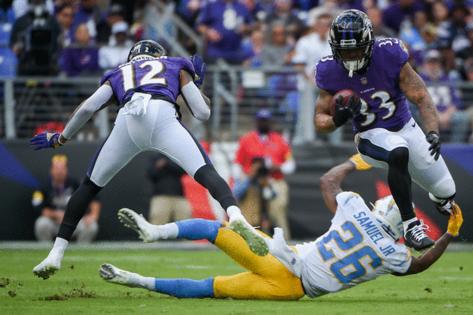 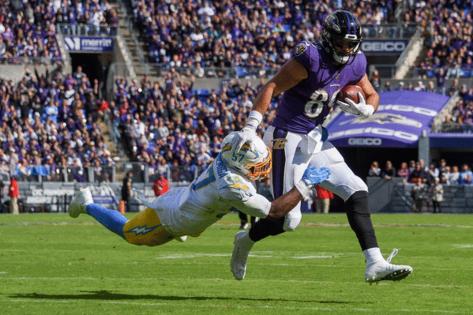 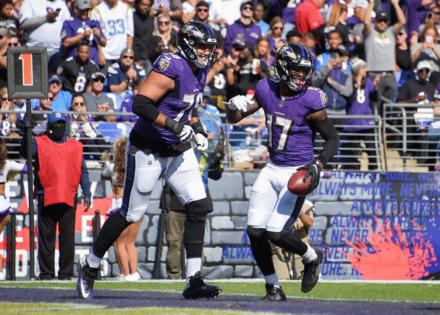 BALTIMORE — The Ravens ran for 187 yards, held star quarterback Justin Herbert to 195 yards passing and dominated on special teams Sunday as they routed the visiting Los Angeles Chargers, 34-6, for their fifth straight win.

Quarterback Lamar Jackson finished 19-for-27 for 167 yards, one touchdown and added 51 rushing yards. In outdueling Herbert, a fellow front-runner for NFL Most Valuable Player consideration, Jackson won his 35th career game to surpass Dan Marino for the most before his 25th birthday in NFL history.

Jackson, who turns 25 on Jan. 7, did not light the Chargers’ secondary on fire the way he had the Indianapolis Colts’ on Monday night in a stirring comeback win. He slapped himself in the head in the second quarter after a bad interception over the middle, and he had a second after a bobbled pass by rookie wide receiver Rashod Bateman. But with a win next Sunday over the Cincinnati Bengals, he and the Ravens would enter a much-welcomed bye week with a 6-1 record.

Sunday’s win over the AFC West-leading Chargers wasn’t supposed to end with a blowout. The Ravens got one with a total team effort. Three running backs rushed for a touchdown, with Devonta Freeman (9 carries for 53 yards) and Latavius Murray (9 carries for 44 yards) leading the way. Le’Veon Bell’s second-quarter score gave the Ravens a 14-0 lead late in the second quarter, a double-digit margin they’d preserve for the rest of the game.

Through the air, Jackson completed at least one pass to seven players. Tight end Mark Andrews continued his hot streak, finishing with five catches for 68 yards and a touchdown, while Bateman had four catches for 29 yards and four first-down conversions in his NFL debut.

On defense, the Ravens put their disastrous “Monday Night Football” performance behind them in a hurry. They allowed just two drives of longer than 30 yards, and none in the second or third quarters. Safety DeShon Elliott got his first career interception on a crucial second-quarter drive. Outside linebacker Justin Houston notched sack No. 99 ½ in his career. And the Ravens held the Chargers, one of the NFL’s best late-down offenses, to just 3-for-12 on third down and 1-for-4 on fourth down.

And on special teams, the Chargers were no match for the Ravens’ supremacy. Kicker Justin Tucker was 2-for-2, including a 52-yard field goal, and wide receiver Devin Duvernay averaged 35 yards per kick return. Chargers kicker Tristan Vizcaino, meanwhile, missed another extra-point attempt, and their kickoff returners rarely got far.

Over the Panthers’ bye week, coach Matt Rhule said he would watch tape of Carolina’s 33-10 loss against Miami before making any decisions about his coaching staff. Seven days later, he called former offensive ...Read More

For the Jets (3-9) to have any chance of salvaging something out of another miserable season they need the defense to play better in this final five-game stretch, ...Read More

He says it’s more serious than the bone bruise that the Cowboys initially reported but he ...Read More

Oh, that previous team? It was the Patrick Mahomes-...Read More

“Coach [Dabo] Swinney has been a great resource for ...Read More