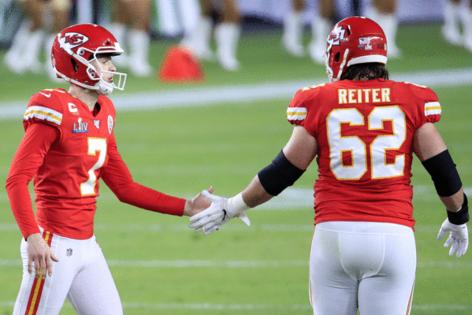 KANSAS CITY, Mo. — Chiefs kicker Harrison Butker knocked through his first 50-plus yard field goal of the season in Sunday’s loss to Buffalo. The 54-yard attempt, made just before halftime, sliced the Bills’ lead to 11 points, 24-13.

The problem, aside from the fact that the Chiefs went on to lose the game and fall to 2-3?

That was only Butker’s fifth field goal of the season, putting him behind his pace from his first four years in a Chiefs uniform. He’s on track for 17 field goals this season, far below his career low of 24, set in 2018.

Not taking so many kicks wasn’t that big of a deal in 2018. That year, the Chiefs had the third-highest scoring offense in NFL history, so they didn’t need to settle for field goals very often, and Butker led the league with 65 made extra points.

So attempting relatively few field goals can be a good thing, provided a team is scoring touchdowns instead. But the reason for Butker’s anemic number of attempts in 2021 is more problematic, and emblematic of the Chiefs’ overall issues.

For starters, the Chiefs have committed 11 turnovers, 10 by the offense. And eight of them have occurred after they’d crossed the 50-yard-line. Presumably, the majority of those possessions would have resulted in scoring chances, perhaps field-goal attempts, had the Chiefs held onto the ball.

When he does get a chance to line up for a field-goal attempt, Butker’s one of the NFL’s best kickers. He’s the second-most accurate placekicker in NFL history, in fact, making 90.5% of his attempts — just behind the Ravens’ Justin Tucker at 90.7%.

And so far this season, Butker has made all of his kicks, including 19 extra points. His 73.3% of kickoffs that result in touchbacks is better than his career average of 70%, too.

In short, he’s having a very good year in spite of the Chiefs’ struggles as a team.

“I definitely feel my best,” he said. “I loved the way I finished last year, and I’m feeling really good this year. I’m really challenging myself in practice, treating every kick in practice like it’s a game kick.”

Might Butker even challenge Tucker’s NFL distance record of 66 yards, set earlier this year in a walk-off victory at Detroit?

“I think I’m definitely capable of doing that,” he said. “I hit it off the crossbar from 68 yesterday (in practice).

“(Tucker) challenges kickers to extend their distance. You have to get an opportunity and hit your A-plus-plus ball.”