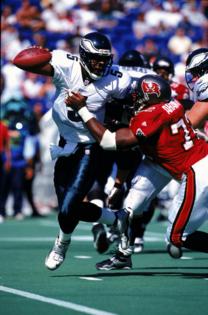 The venue has garnered a reputation as one of the NFL’s most unfriendly confines, a South Philadelphia snakepit where they once even booed Santa Claus.

To which Bucs fans can rightfully retort, humbug.

Tampa Bay’s history of success at Lincoln Financial Field (and Veterans Stadium before that) remains as profound as Rocky Balboa’s left hook. Some of the biggest names in franchise lore have flourished there, helping shut down Veterans Stadium for good and crashing the housewarming of the “Linc” in a surreal eight-month span (more on those later).

In fact, the Bucs can improve to .500 all-time in the City of Brotherly Love when they play their 12th game Thursday night on that sprawling stretch of South Philly acreage that has served as home to both stadiums. Compare that to their road record against other NFC East foes (2-8 vs. Giants, 1-12 vs. Cowboys), and their slugger’s chances always seem better in Balboa’s backyard.

Here’s a look at Tampa Bay’s five road wins against the Eagles, listed in ascending order of significance.

Perpetually beleaguered quarterback Trent Dilfer attempted only 14 passes (completing seven) on a day when his most effective drop-backs were for the purpose of handing off. Warrick Dunn and Mike Alstott teamed for 146 rushing yards, while the defense sacked Eagles quarterbacks Doug Pederson and Donovan McNabb a combined nine times (second-most for a single game in franchise history). Warren Sapp had three of them, establishing what was then a team record.

The greatest ensemble performance in Lovie Smith’s two-season tenure included Jameis Winston tying an NFL single-game rookie record with five touchdown passes to five different guys. Additionally, Lavonte David had two interceptions (including a pick-six) and Doug Martin ran for 235 yards. Winston and Co. opened the second half with a 15-play, 80-yard scoring drive that consumed 9:47, converting on third-and-16, second-and-20 and second-and-14 during the march. “If you just talk about an offensive drive in an NFL game, it doesn’t get any better than that,” Smith said.

The beleaguered Bucs of Sam Wyche fostered hope for their fan base by winning four of their last five games in 1994, then really spiked morale with this dominant 1995 opener. The defense sacked Randall Cunningham four times in an eight-play stretch in the second period and totaled five for the day (including one by rookie Warren Sapp). Second-year quarterback Trent Dilfer passed for 215 yards and two touchdowns, including a 64-yard scoring bomb to Horace Copeland.

Pageantry and pomp, retribution and "Rocky" all converged on a Monday night as the Eagles formally opened Lincoln Financial Field. Eight months after the Bucs ended their season in the NFC title game, the Eagles brought out Sylvester Stallone — bedecked in a Duce Staley jersey — to stoke the crowd of 67,772. It would be the only sign of fight shown by the hosts all night. The Bucs defense allowed Philadelphia inside the red zone only three times, forcing turnovers the last two, while Joe Jurevicius had two acrobatic touchdown catches.

Still the greatest road triumph in Bucs history. On a frigid Philly afternoon (16-degree wind chill), the Bucs exorcised their cold-weather curse, vanquished their road playoff futility (0-6 all-time entering this game) and clinched their first Super Bowl berth. By now, the details of this NFC title game are embedded in franchise lore, but the image of Ronde Barber sealing things with his 92-yard pick-six with 3:12 remaining never will grow old.

CHARLOTTE, N.C. — It’s time the Panthers fully commit to Sam Darnold for the remainder of the season and look internally to solve their offensive issues.

On Wednesday morning, The Observer confirmed reports that the ...Read More

TAMPA, Fla. ― Jason Pierre-Paul is used to chasing Jameis Winston to the ends of the earth. The former teammates went hiking together in Colorado during the offseason.

But Pierre-Paul is even more eager to be reunited ...Read More

TAMPA, Fla. — Initially, Charlie Crist recognized only the gesture, not the guy in the Mike Evans jersey, dark sunglasses and wide straw hat delivering it.

Like millions of others, Crist watched Sunday afternoon as CBS�...Read More