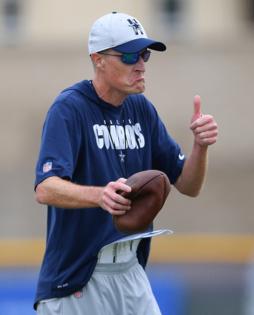 It had to be said.

McCarthy needs to rein him in now or take his chances with what appears to be the inevitable.

Because while special teams can often be about production, it’s also a lot about protection.

Don’t give up a big return. Don’t miss an easy kick. Don’t fumble. Don’t commit a penalty that sets your team back.

What it can’t be is a detriment.

And it for damn sure, it can’t be cuckoo for Cocoa Puffs.

There is no other legitimate way to describe it when you listen to Fassel’s explanation for his bad decision to try to block a punt late in the first of half of Sunday’s 20-17 victory against the Los Angeles Chargers.

The Cowboys were called for roughing the punter, which gave the Chargers an automatic first down and 15 yards. The Cowboys were bailed out eight plays later when Los Angeles missed a 44-yard field goal. But it could have resulted a game-tying field goal, which very well might have changed the complexion of the game.