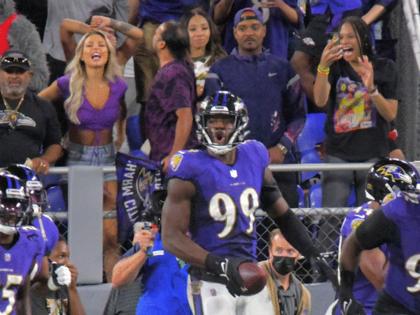 He had said before his first game that the goal was to win, so after he did not, after Odafe Oweh and the Ravens returned home with a Week 1 loss and a target on their back, he made time for more practice, this time on his own.

“This is your profession now,” Oweh had explained, “so what you’ve got to do is what you’ve got to do.” And what the rookie outside linebacker had to do Friday afternoon, just four days after he’d recorded his first NFL sack, just 15 minutes after the week’s last practice had ended, was head back out onto the field. A long work week was getting even longer.

As passersby looked on and Ravens officials tried out free agents on a nearby field, Oweh drilled on a pass-rush sled, honing his technique, the brilliant possibilities of his career slowly turning into probabilities. Hard work had taken him from two years of varsity football to the first round of the NFL draft. Smart work would take him to rarefied air, to Pro Bowls, to the levels his mentors in Baltimore have already reached and now insist he reach himself.

It is not hard to imagine what Oweh can become. He has already shown so much. In his NFL debut, he was the Ravens’ most productive pass rusher. On Sunday, he was their most impactful defender, helping to force two turnovers, including the decisive fourth-quarter fumble in a prime-time win over the Kansas City Chiefs. “He’s well on his way,” coach John Harbaugh said.

On Wednesday, Oweh was named the AFC Defensive Player of the Week. Teammates see the potential for so much more. Outside linebacker Justin Houston has compared Oweh to a video game character. Defensive tackle Justin Madubuike said he’s “built like a cyborg.” Defensive end Calais Campbell said that with the combined wisdom of the Ravens’ locker room, “there’s no way that he’s going to be able to fail.”

When the latest hype is relayed to him in an interview, Oweh is almost embarrassed, smiling bashfully and speaking softly in his deep voice. He appreciates what others see in his future. He is happier to have two stars shaping it. Because for as rare as Oweh’s talent might be, his star tutors’ credentials are even more precious: a combined 189 ½ sacks, 236 appearances and 10 Pro Bowl selections.

“Obviously, we’re all men here, so at the end of the day, what we do and what we don’t do is up to the person that’s doing it,” Oweh said recently. “But I obviously feel like guys like Justin [Houston] and Calais, they put it upon themselves to really try to push us, really try to make sure we max out everything that we can be.”

Oweh did not get here without help. At New Jersey’s prestigious Blair Academy, coach Jim Saylor convinced a 16-year-old Oweh to play football for the first time. At Penn State, he learned from standout edge rushers Shareef Miller, Yetur Gross-Matos and Shaka Toney, all draft picks themselves. They schooled him on technique, taught him how to play fast.

It wasn’t until he arrived in Baltimore, though, that he found his “Yoda.” Houston, signed in late July to a one-year deal, “knows everything,” Oweh said. So when Houston stayed late after one draining training camp practice to get a few more repetitions in, Oweh and fellow rookie outside linebacker Daelin Hayes tagged along. Soon it became a regular group outing, one Jedi Master training two Padawans in the ways of the Force.

“I try to ask him questions about different sets, how to approach that, how to attack that, and he’ll have the answer right away,” Oweh said. “I really appreciate that because, like I said, I’m new to the game, so I’m trying to pick up something different every single time. I try to work with him after practice — hands, just learning, learning stuff and picking every little thing. With film, too, how to take care of your body – just that vet mentality, being a pro and everything.”