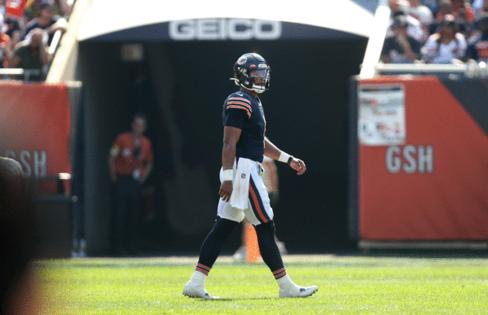 One of the great mysteries of Justin Fields’ performance in Sunday’s 20-17 victory over the Cincinnati Bengals is why the Chicago Bears didn’t change their game plan to favor him.

When Fields replaced starter Andy Dalton, who got knocked out with a left knee injury in the second quarter, they appeared to run plays better suited for the veteran pocket passer. The offense bogged down and the Bears barely hung on with the benefit of a four-takeaway performance by the defense.

Maybe that explains why coach Matt Nagy, when asked a personnel question Monday morning, claimed it was scheme-related — meaning off limits to discussion.

Dalton had his knee examined Monday, and Nagy said he expected to have a full report by the evening. NFL Media reported that an MRI confirmed Dalton is dealing with a bone bruise, and that leaves his availability for Sunday’s road game against the Cleveland Browns in question.

“If Andy is healthy, is he your starter?” said Nagy, repeating the question. “That’s something that I’m not going to get into with scheme.”

When a reporter objected that the question wasn’t related to scheme but rather to personnel, Nagy didn’t budge.

About 10 minutes after Nagy’s news conference wrapped up, a public relations official returned to the media room with a clarification: Nagy did not understand the original question, and Dalton is indeed the starter when healthy.

That doesn’t get us any closer to knowing who will start against the Browns. It’s understandable Nagy doesn’t want to tip off Cleveland’s coaching staff regarding which quarterback it should prepare for. Dalton and Fields possess different skill sets, and Fields’ ability to extend plays with his legs and turn seemingly broken plays into big gains likely would lead the Browns defensive coaches to craft a different plan.