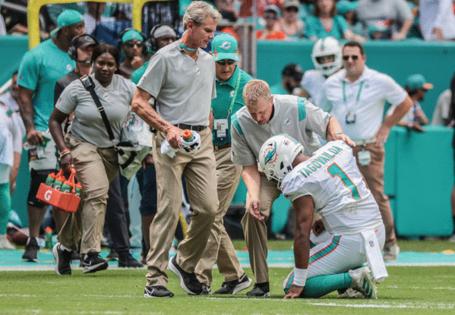 Today’s question: What does it mean when a team constantly repeats it needs to “watch the films” to explain what went wrong after being blitzed on its home field, 35-0?

Because that’s what the Dolphins fell back on, one by one, when asked what went wrong in this uglyfest against Buffalo, from the offensive line to defensive line to the coaching.

Let’s help them. Let’s cue the tape to one play the entire organization should watch and ponder: Four minutes into the game. Fourth-and-two at the Buffalo 48-yard line.

Well, OK, that’s overstating it. Maybe. It’s fair to say this is the concern in their biggest decisions all along. Watching that one play everyone from general manager Chris Grier has to wonder if Humpty Dumpty can be put back together again.

Right tackle Jesse Davis got beat like an egg, Tagovailoa got rocked in throwing in incompletion and then the big fear of them all happened. Tua didn’t get up. Well, he got up and then sunk down in the grass of Hard Rock stadium.

He then walked gingerly back to the sideline, went on a cart and was never seen again Sunday.

The X-rays of Tua’s ribs were negative, meaning nothing was broken. The conclusion here is there’s a big crack in the rebuild, though.

FRISCO, Texas — Life has not been easy for Dallas Cowboys quarterback Dak Prescott, who missed 11 games last season with a fractured ankle, missed all of the preseason with a strained shoulder and now is dealing with a ...Read More

Kennedy was sitting in the front row behind the end zone at Raymond...Read More

Kyle Shanahan on Monday, hours after the 49ers dropped their fourth straight game, announced Jimmy Garoppolo is expected to remain the team's starting quarterback this week against the Chicago Bears.

During his decade with the Seahawks — in which he has become the unquestioned greatest quarterback in franchise history — Russell Wilson’s greatest attribute has been his ability to close out games, to steal a phrase...Read More