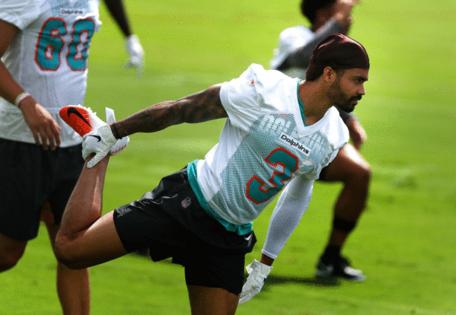 MIAMI GARDENS, Fla. — The Miami Dolphins will again be without speedy wide receiver and free-agent acquisition Will Fuller for their home opener and key Week 2 divisional matchup with the Buffalo Bills on Sunday.

“I’ve had multiple conversations with him last couple of days,” Flores said. “He is definitely dealing with a personal issue. I respect his privacy, and I ask that everyone respects his privacy. We support Will, and we’ll take it one day at a time.”

Fuller was set to debut for the Dolphins on Sunday, coming off the final game of his six-game suspension handed down to him for use of performance-enhancing drugs last year while with the Houston Texans.

“He didn’t play last week,” Flores said. “Next guy will step in and get reps, which we got [Thursday] and get some more [Friday].”

Without Fuller in Week 1 at New England, DeVante Parker led Dolphins pass catchers with 81 receiving yards on four receptions. Rookie Jaylen Waddle also had four catches, which went for 61 yards and his first career touchdown. Running back Myles Gaskin led the team in receptions, with five that went for 27 yards, and fellow back Salvon Ahmed made two catches for 24 yards. Durham Smythe made one 9-yard catch, while fellow tight end Mike Gesicki and wide receiver Albert Wilson were targeted three and two times, respectively, without a reception.

When asked if Fuller’s situation could stretch for multiple weeks and if he’s confident he’ll return to the team this season, Flores reiterated, “One day at a time.”

“Things arise in our lives. That’s kind of what he’s dealing with right now. He has our support. He has my support,” Flores said. “Is it a surprise? Things happen, and when they happen, they’re not part of your normal every day — it’s a surprise from that standpoint. But you kind of deal with it. He’s dealing with it, and we’ll support him. We’ll just make our adjustments as a team, play without him and move forward.”

Fuller signed to the Dolphins this offseason on a one-year, $10.6 million deal with $3 million in added incentives that he would likely forfeit if he remains out for significant time this season. If he doesn’t return, he would likely have to repay the $9,635,011 signing bonus in his contract.

Fuller hasn’t played more than 11 games since his rookie season in 2016. In 2018 against the Dolphins, he tore the ACL in his right knee, which caused him to miss the remainder of that season. The year before, he had minor surgery on the knee after also missing time with a collarbone issue. In 2019, hamstring and groin injuries caused him to miss games, while the suspension cut his 2020 season short.

In recent years, the Dolphins had running back Arian Foster abruptly retire during the 2016 season after battling injuries he couldn’t overcome. In 2017, linebacker Lawrence Timmons went AWOL for a week before needing time away from the team to address a personal matter.

Aside from Fuller being out, fellow wide receiver Preston Williams is the only player with an injury designation going into Sunday’s game against the Bills. Williams is listed as questionable after he was limited in Friday’s practice practice with a foot/knee injury.

Williams went back to being limited after he participated fully on Thursday and was limited on Wednesday. Prior to Friday, Williams was only listed as dealing with his foot injury that goes back to what cut his 2020 season short.

Tight end Adam Shaheen (knee) and linebacker Andrew Van Ginkel (back) had a second consecutive full practice after being limited on Wednesday. Both are expected to play.