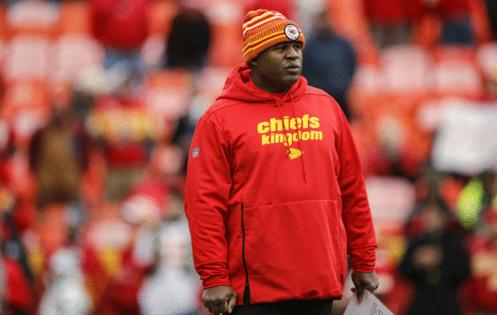 ESPN's Adam Schefter, however, reports that sources believe Bieniemy will rise as a head-coaching candidate for the vacant USC job, which became available after the Trojans fired Clay Helton over the weekend.

It's important to note that Schefter used the word "believe" in his report, suggesting nothing was set in stone in the pursuit of Bieniemy as of Tuesday.

The report, though, make sense when considering the 52-year-old Bieniemy, who was born in New Orleans, grew up in Southern California and even played for the then-San Diego Chargers.

Bieniemy's name has come up multiple times over the past three years as a viable candidate for an NFL head-coaching gigs. But he continues to be spurned by NFL teams despite strong public endorsements from Chiefs chairman and CEO Clark Hunt and head coach Andy Reid.

Over the past two offseasons alone, Bieniemy is known to have interviewed with the New York Jets, Atlanta Falcons, Tampa Bay Buccaneers, Cincinnati Bengals, Houston Texans, Carolina Panthers and Miami Dolphins, among other teams.

Bieniemy, who has been with the Chiefs since 2013, also spurned a potential opportunity to fill the head-coaching vacancy at Colorado, his alma mater, in February 2020.

Reid is scheduled to speak with the media Wednesday, while Bieniemy is scheduled to talk Thursday. The offensive coordinator's potential interest in USC will surely come up as a topic of discussion.

EAST RUTHERFORD, N.J. — Congratulations Arthur Smith, you just won your first game as an NFL head coach. What are you going to do now?

OK, that wasn’t exactly the first thing the ...Read More

One by one they stepped to the microphone to tell reporters the company line. They talked about working, and about effort, and generally gave the impression of being both frustrated and focused.

SANTA CLARA, Calif. – No confetti showered down on Levi’s Stadium’s field like the last time fans packed a 49ers’ game against the Green Bay Packers.

Instead, it was the Packers who stormed the field in ...Read More

Matt Nagy’s tenure as Chicago Bears coach reached a crisis Sunday afternoon when his stumbling offense, which has routinely been arrow down since the end of the 2018 season, was worse than ever in rookie quarterback ...Read More

The Steelers are all alone in last place in the AFC North, and it looks like they might stay there.

Spare me the excuses. The Baltimore Ravens played without half their team Sunday, too, and found a way to win at Detroit ...Read More

This is on John Mara. Signed: the Giants’ fans.

For the first time, a disgusted Giant fan base collectively pointed their finger publicly at Mara on Sunday as the responsible party for this franchise’s futility.