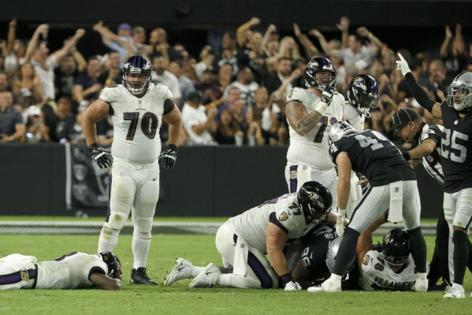 The Ravens had an offseason, training camp and three preseason games, right?

They were supposed to correct all the problems that have been hampering this team. But the season-opening 33-27 loss to the Las Vegas Raiders in overtime on “Monday Night Football” was a microcosm of the past three years of disappointment in big games.

The offensive line couldn’t pass block. Quarterback Lamar Jackson had some dazzling runs, but his poor ball-handling resulted in two fumbles, one of which led to the Raiders’ game-winning touchdown in overtime. Forget the talk about a great Ravens defense. The group couldn’t get off the field in crunch time and they lacked a quality and consistent rush.

Logic demands that this loss be kept in perspective because it’s only one game and there are 16 remaining in a long, long season. The Ravens currently lead the league in injuries, which includes having their top three running backs — J.K. Dobbins, Gus Edwards and Justice Hill — out for the season.

But here is the scary part: The running backs played well enough for them to win, and that group will get better with more practice time, but the same might not be true about the offensive line improving and the pass rush getting better.

As for Jackson, he played exceptionally well in the first half, but it seemed as if he lost focus in the second. He has always carried the ball in a lackluster manner, but he’s been in the league for four years. He should have learned how to secure the ball by now.

But Jackson was the Ravens’ top performer on Monday night, rushing 12 times for 86 yards and completing 19 of 30 passes for 235 yards and a touchdown. He made some terrific passes, like the 10-yard touchdown reception to Marquise Brown in the second quarter, and he had some great runs, and he did all of this despite being under duress while running and throwing. The Ravens tried to upgrade their offensive line in the offseason by adding right guard Kevin Zeitler and right tackle Alejandro Villanueva, and while Zeitler was solid, Villanueva got beat most of the night. He was slow, stood too high and had no leverage.

On the other side was left tackle Ronnie Stanley, making his first appearance in a game since injuring his ankle last November in a game against the Pittsburgh Steelers. He played just as poorly as Villanueva. Stanley will get better in the next two weeks, but Villanueva won’t, and the Ravens don’t have anyone on the roster who is better. This isn’t Major League Baseball. There are no guys in the farm system to bring up.

So, Jackson can only be picked on so much. But if he can be consistent with his mechanics and throwing motion, he could become a great player.

On defense, the Ravens signed outside linebacker Justin Houston early in training camp and drafted Penn State outside linebacker Odafe Oweh in the first round in April to improve the pass rush, which looked good for most of the first half. Then came the second half, and the pass rush disappeared as Raiders quarterback Derek Carr finished with 435 passing yards by completing 34 of 56 passes. If he had been hot early in the game, he might have torched the Ravens’ secondary for 600 yards.

We’ve seen this before in the postseason. Defensive coordinator Don “Wink” Martindale comes up with all these blitz and pressure schemes, but the good teams figure out how to block them and the Ravens lose. On Monday night, coach Jon Gruden and Carr took the Ravens apart in the second half. Instead of changing things up and trying something different, Martindale kept calling those all-out blitzes and Las Vegas had all the answers.

It has and always comes down to winning one-on-one matchups, and the Ravens don’t have the players on their defensive front who can harass quarterbacks. Meanwhile, offensive coordinator Greg Roman could help the line by calling some screens, draws or slants to slow the pass rush, but the Ravens might be the worst screen team in the NFL. He failed to give both tackles much help with chip blocks from the tight ends or running backs.

Still, it’s only Week 1. This is basically the same cast of players who have won 35 of 48 regular season games in the last three years. It was a sloppy game, which is to best expected, especially with how little the starters played in the preseason.

But the disturbing thing is that the Ravens were supposed to upgrade certain areas and it wasn’t on display Monday night.

Raider Nation was its usual eclectic self for the season opener in Las Vegas on Monday, with some fans going with a Captain Jack Sparrow-meets-Darth Vader vibe that nicely complemented the team's new $1.9 billion "Death ...Read More

The Panthers acquired Santoso last month via a trade with the New York Giants just before parting ways with ...Read More

The cheeky ease with which the kid started — in a place that’s haunted the Miami Dolphins — matters in a good way. Everyone knew Jaylen Waddle was fast. Was anyone sure he’d be this quicksilver fast in turning NFL ...Read More

That’s how Miles Sanders greeted the public after the Eagles shocked the world.

We have discovered a secret dark-web memo sent from the Minnesota Vikings to Aaron Rodgers. It is shocking. Shocking, I say.

Aaron: Nice work. And the hair looks Fabio-lous. Our plan is on track. But we have a...Read More

The Ravens’ night opened in the most Las Vegas way possible, all glitz and bright lights: a Gladys Knight national anthem inside a $2 billion stadium; a Steve Aoki soundtrack, the bass pumping; a season-opening ...Read More