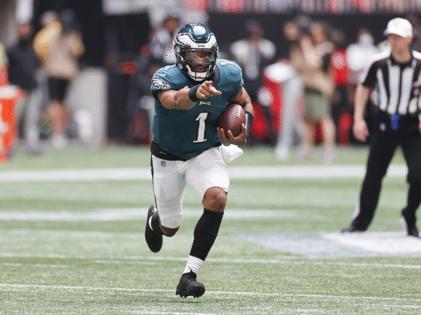 That’s how Miles Sanders greeted the public after the Eagles shocked the world.

Week 1 could not have gone better for the first-place Eagles.

The Philly Birds flew south and upset the Dirty Birds, 32-6. First-round receivers DeVonta Smith and Jalen Reagor each caught a touchdown pass; Smith, a rookie, did so on the first catch of the first series of his first game. Try to sell that script.

Jalen Hurts, the replacement for traitorous coward Carson Wentz, threw for three TDs, no interceptions, ran for 62 yards, executed a perfect two-minute drill before halftime, and displayed a level of professional quarterbacking not seen since Nick Foles.

The running backs ran (Philly’s favorite thing), and did so for 111 combined yards, 74 of them from Sanders. The rookie, Kenneth Gainwell, had a rushing TD. To his credit, Sanders has predicted greatness from this team all summer.

“This is exactly what I expected,” said Sanders, still in his padded undershirt and football pants, eye-blacked and sweaty.