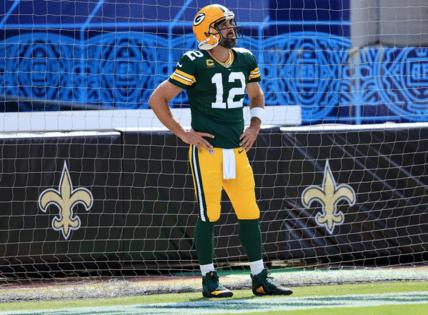 We have discovered a secret dark-web memo sent from the Minnesota Vikings to Aaron Rodgers. It is shocking. Shocking, I say.

Aaron: Nice work. And the hair looks Fabio-lous. Our plan is on track. But we have a request.

Yes, we want you to destroy the Green Bay Packers from within, like green mold. We know how divisive and conflicted a locker room can become. We kind of wrote the book on the subject. It was not a best-seller.

Heck, we have star players — we are not making this up — who are jeopardizing our season, people's jobs and their own health by refusing to get vaccinated.

The coach wants to punch our quarterback, Kirk Cousins, but the general manager may get to Cousins first, and we know the offensive line won't be able to stop either of them.

I mean, George Washington insisted on his troops getting the vaccine for smallpox, otherwise we'd all be speaking a different language today. Using words like "Brilliant!'' and "Spot of bother.''

Anyhoo, we love your intentions, but your approach could use some work.

In general, you've handled your assignment as a Minnesota agent of chaos beautifully. You've angered management, disrupted offseasons and now blown a game without saying anything that can be traced back to us.

You've embarrassed the organization that made you rich and famous, and done it with a straight face and wavy hair. Bravo.

But while you're acting the part of spurned lover, let's work on your acting skills. Let's aim for a little more Bob Duvall, a little less Jim Carrey.

Yes, you're overdoing it. Losing to the Saints and Jameis Winston in Jacksonville when your team is favored to make it to another NFC title game? Chef's kiss. Losing by 35 while scoring just three points? You're giving away the plot.

We would prefer that you lose games in excruciating fashion. This will help you transition to Minnesota.

We want you imitating Fran Tarkenton, not Christian Ponder.

We're choosing our words carefully, because we know you're as sensitive as a chipped tooth, but if we're going to steal you away, we need you to keep us from being charged with tampering.

Poor Brett had to lose his job to you, spend a year playing for the Jets, then pretend he was retired just so he could skip training camp and still make it to opening day for us. We don't blame him for that. We blame him for coming back in 2010 when what he really wanted was to sell copper bracelets on cable TV.

We expect more from you, and we expect the process to move much more quickly. You go ahead and do everything you can to destroy your trade value and reputation, then we'll offer a few first-round draft picks (who needs another Jeff Gladney, anyway?) and the Packers will be eager to play against you.

So, to review the plan we agreed on:

1. Keep making Packer Nation hate you. It's a slow process, but we have faith that you can finish the job.

2. Don't get blown out, and don't get benched. What if Jordan Love gets to play and is so lousy the Packers are forced to keep you? Wipe that smirk off your face.

3. Continue undermining everyone who has hurt your feelings — the president, the general manager, the coach, that one waiter who gave you side-eye at Green Bay's restaurant. Vengeance is a dish best served often.

4. Keep yourself healthy. No hero plays. If you weren't willing to work out with these guys in the offseason, why would you risk your neck for them now?

We believe that with our receivers and running back, and three or four new offensive linemen, you can take us to the promised land — which, for us, is the NFC championship game.

So do your part, and act your part. This week, try to put up at least six points.

*—Disclaimer: Some of this is not true.

Quez Watkins had beaten his man and blazed down the sideline for a 91-yard completion from Jalen Hurts, and DeVonta Smith had drawn a pass-interference penalty in the end zone on a cornerback, Josh Norman, who had signed ...Read More

“If they want to give me a mic pregame, I’ll go sing ...Read More

One of the great mysteries of Justin Fields’ performance in Sunday’s 20-17 victory over the Cincinnati Bengals is why the Chicago Bears didn’t change their game plan to favor him.

If you want to know where to look after the worst Sunday of this three-year Dolphins era, here’s the idea: Look up.

Two games into the season and the Dallas Cowboys are "at home" at .500.

Thanks to the NFL referees, and karma for a Chargers franchise that should never have left San Diego, the Cowboys left their home away from home, Los...Read More

GREEN BAY, Wis. — The Detroit Lions went toe-to-toe with the Green Bay Packers in the first half of the NFC North matchup on Monday Night Football, but as heavy rains drenched Lambeau Field in the third and fourth ...Read More