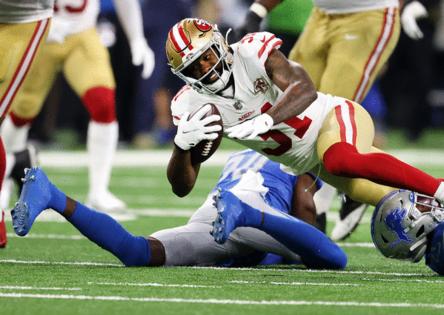 The most-injured team in the NFL in 2020 lost two starters to significant knee injuries during the first game of the season Sunday.

The 49ers will be without top cornerback Jason Verrett after he tore his ACL in the fourth quarter of the Week 1 victory over the Detroit Lions, while starting running back Raheem Mostert "chipped" cartilage in his knee and is expected to miss eight weeks, head coach Kyle Shanahan said Monday on a conference call.

For Verrett, it's the second time he's torn an ACL since entering the NFL as a first-round draft pick of the Chargers in 2014. The first came in 2016 before he suffered a torn Achilles during a conditioning test ahead of training camp in 2018. He joined San Francisco in 2019 but sat out the year following a Week 2 ankle injury, and finally returned to play 13 games at a Pro Bowl level in 2020, earning a one-year, $5.5 million deal for 2021.

Verrett over the last two seasons has become a highly-though of member of the locker room. Players and coaches have cited Verrett's tenacity and work ethic to return from his long list of leg injuries to play at a high level last season.

"Losing a player like Jason's a pretty big deal just because of the type person he and the kind of player he is," Shanahan said.

Verrett was upset on the sideline and was seen with tears in his eyes as he exited the field and received help from staffers before getting carted to the locker room. Shanahan said he spoke at length with Verrett Sunday night after the game before an MRI at the Greenbrier resort in West Virginia confirmed the team's fears of a torn ACL.

"He was very, very upset," Shanahan said. "Jason puts his heart into this. He's been through this a ton. And when he's played, he's had a great career. But everyone knows how much more's out there with how good of a player he is. That's tough for him, but he's a man and as tough as a guy I've been around. So he'll persevere. It takes time, it'll pass but you got to grieve it a little bit. I know he's probably doing that right now and we all are for him."

Replacing Verrett won't be easy. Cornerback was the team's thinnest position before Verrett's injury, and now the team will likely rely on veteran Josh Norman, 33, to pick up some of the slack. Norman, a former Pro Bowler with the Panthers in 2015, was signed off the street just six days before the regular season started after not participating in a training camp anywhere.

Shanahan said he's also hoping expected starting cornerback Emmanuel Moseley to return this week. Moseley missed the Lions game with a knee injury after dealing with a hamstring injury during the preseason which followed a stint on the COVID-19 list to being training camp.

"I can't guarantee this week but I'm holding out hope for it," Shanahan said of Moseley's pending return. "With that being the case, I feel we got enough guys in our building. But that's something that you always got to look to see if there's any way you can improve. (If you can) you always do that."

For Mostert, he would miss eight games for the second straight season after dealing with a recurring high ankle sprain in 2020. He left the game after two carries on Sunday, leading to rookie Elijah Mitchell leading the team with 19 carries for 104 yards and a touchdown in his NFL debut. Mitchell was a sixth-round draft pick who surpassed third-round pick, Trey Sermon, in practice leading up to the opener.

Sermon is expected to be active after being a healthy scratch for Sunday's game. Jeff Wilson Jr., who had surgery to repair a torn meniscus over the summer, is expected back between Weeks 6 and 8, Shanahan said. He's currently on the physically unable to perform list and could provide a needed boost to the running back room midway through the season. Wilson's been regularly rehabbing his injury on the side field while his teammates practice.

"He's looked great around here, working out, getting ready," Shanahan said. "I know he'll be helping us some time this year."

In other injury news, Shanahan is holding out hope defensive tackle Javon Kinlaw (knee) will practice this week after missing Sunday's game. Linebacker Dre Greenlaw aggrevated a groin injury from last month during his interception return for a touchdown on Sunday and is day to day. Backup linebacker Marcell Harris strained his oblique and is expected to return to practice this week. Pass rusher Dee Ford, who notched his first sack Sunday since the 2019 playoffs, suffered a minor ankle sprain but isn't expected to miss time, Shanahan said.

The 49ers are spending the week at the Greenbrier to save travel time ahead of next week's road game against the Philadelphia Eagles, who beat the Atlanta Falcons on the road Sunday, 32-6.

PITTSBURGH — The Steelers spent the majority of their offseason overhauling the way they run the ball, everything from the coaching to the scheme and technique to the personnel.

The objective was not just to run the ...Read More

LANDOVER, Md. — Odell Beckham Jr. would have been labeled a “distraction” for this.

So what will Kenny Golladay’s consequence be for screaming in the direction of Daniel Jones and offensive coordinator Jason ...Read More

Reality is, he could return at some point this fall.

MIAMI GARDENS, Fla. — The Miami Dolphins will again be without speedy wide receiver and free-agent acquisition Will Fuller for their home opener and key Week 2 divisional matchup with the Buffalo Bills on Sunday.

MINNEAPOLIS — Defensive end Everson Griffen, one of four Vikings ruled out of Sunday's game at Arizona, was involved in a car accident while swerving to miss a deer en route to TCO Performance Center on Thursday morning,...Read More

Nsekhe spent the night in hospital and was released Friday ...Read More