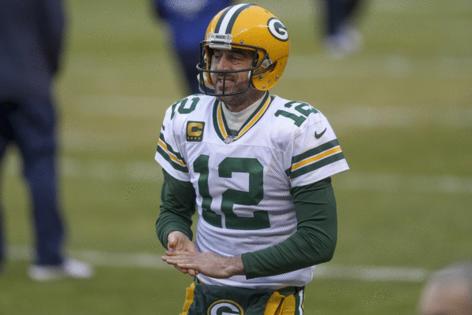 None of the offseason drama will lead to a Rodgers trade or retirement here in 2021, per NFL Network. It will feature Rodgers playing for the Packers with three seasons remaining on his current contract.

Perhaps it will be one “Last Dance,” as Rodgers and wideout Davante Adams intimated a few days ago with a simultaneous post of a Michael Jordan-Scottie Pippen photo.

On Monday, Packers CEO Mark Murphy said: “We have been very clear we’re not gonna trade him.” GM Brian Gutekunst said he is “hopeful” for a positive outcome.

And Rodgers’ agent and the Packers have had consistent discussions recently to “do something that would bring Rodgers back to the team and make him happy,” per NFL Network’s Ian Rapoport on The Pat McAfee Show.

Rapoport said he is not sure if Rodgers will report to camp on Tuesday, and he said there are also some people close to Rodgers who haven’t heard about the QB’s intentions to stay.

Left tackle David Bakhtiari, who has been working out with Rodgers recently, claimed to be on the outside of this gossip on Twitter.

Rodgers’ public feud and frustration with Packers management has been well documented, but once the NFL Draft passed with no deal, teams were low on the capital required to pull off the blockbuster.

Green Bay also had everything invested in making sure Rodgers stayed. And Murphy, Gutekunst and coach Matt LaFleur all reportedly flew to California in the spring to try and mediate and negotiate a solution.

Rodgers reportedly turned down a contract extension earlier this offseason, but it seems as if he wants to continue playing football and recognizes that doing so in Green Bay is his best option, at least for 2021.