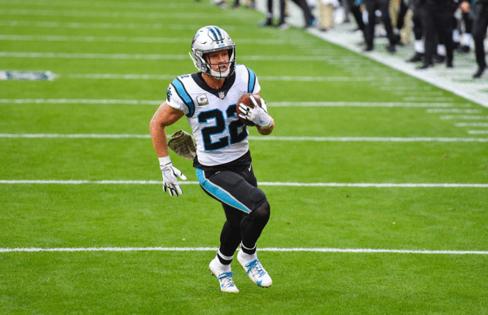 Last offseason, Christian McCaffrey became the highest paid running back in the NFL, coming off the third 1,000 rushing-1,000 receiving season in NFL history and primed for another big year.

The question that continues to pop up surrounding successful running backs, is how reps are too many? In 2019, McCaffrey had 403 touches — 287 rushes and 116 receptions, most in the NFL.

“If there’s one person that can take (a high volume of touches) — one person that takes care of his body — that’s Christian McCaffrey,” Brady said in June 2020. ”I can’t sit here and tell you guys the number (of touches) is 400 (in 2020), the number is 350. Every single game will be different. A lot of it will come down to the rest of the personnel on our team.”

Of course, the number of touches for McCaffrey in 2020 became a moot point. He played in just three games because of a variety of injures and missed some time in two of the three games he was active for.

Despite all that, Brady isn’t changing his mentality when it comes the 25-year-old running back’s usage.

“When he’s coming out here, the work ethic that he’s putting into it, it’s impressive. Every day, there’s examples that he’s putting on tape that I want everybody to be like, ‘Hey, we got to play like this.’ ”

McCaffrey has stepped into one of the team’s leadership roles, especially with the recent changing of the guard at the quarterback position. He is the face of the franchise, and his presence on the field will make this offense better.

After a season that involved three unrelated injuries, it wouldn’t be surprising if extra caution was involved in getting him back on the field, no matter how well he takes care of his body. There’s also a reason why there’s trepidation in the NFL surrounding giving running backs second contracts.

Like Brady, however, McCaffrey’s mindset has not changed. His touches should be expected to be high once again.

“You just get out there and go,” McCaffrey said of not focusing on his recent injuries. “There’s no thinking, there’s just doing. Football to me is a meditation. When you’re out there, you’re not thinking ever. You’re just using your God-given talents to be the best player you can be, and the more you think, the worse you play. And so for me, it’s just going out there and being mindless and having fun playing football with my teammates.”

The Steelers are not short on starters who are entering the final years of their contracts. Many of the team’s top players, including JuJu Smith-Schuster, David DeCastro and Eric Ebron, will be looking to cash in with ...Read More

Former Falcons wide receiver Julio Jones shed some light on how the franchise’s all-time leading receiver in catches and touchdowns was traded when he addressed the media for the first time Thursday.

Jones, who was ...Read More

Kyle Long suffered a leg injury that’s likely to prevent him from participating in training camp later this summer, a source ...Read More

CHICAGO — Justin Fields unleashed a pass down the left sideline of a Halas Hall field Wednesday, and observers at the Chicago Bears practice perked up.

TAMPA, Fla. ― As soon as the Bucs’ mandatory minicamp ended Thursday, coach Bruce Arians encouraged players who hadn’t received the COVID-19 vaccine to get it.

The literal shot in the arm could provide one for the ...Read More