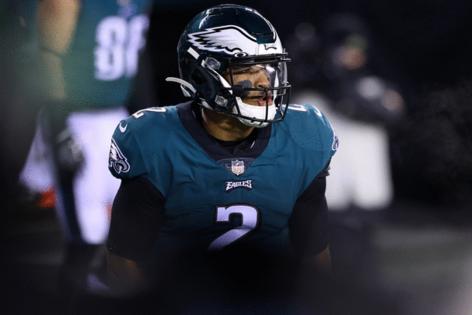 PHILADELPHIA — In a perfect world, Jalen Hurts would've gotten somewhere in the neighborhood of 1,500 to 2,000 snaps in Nick Sirianni's offense this spring and been ready to hit the ground running when training camp starts in seven weeks.

But there was nothing perfect about this NFL spring. COVID-19 gave the geniuses that run the league's players union an excuse to eliminate spring OTAs. So, instead of 10 days of practices with live 7-on-7 and 11-on-11 drills, Hurts and the Eagles had to settle for virtual meetings and walk-throughs, for which Sirianni had to negotiate with the Eagles' team leaders.

The one consolation for Hurts is his familiarity with the team's new 34-year-old quarterbacks coach, Brian Johnson. Hurts' father, Averion, was one of Johnson's high school coaches at Baytown Lee (Texas) High School. Johnson has known Hurts since Hurts was 4 years old. Even before the Eagles hired Johnson, Hurts referred to him as "Coach Brian."

"I've known his dad since I was 15," Johnson said. "I have memories of Jalen running round the fieldhouse when I was a high school player. We'd come back home from college in the summer for workouts, and his dad was running the weight program. So, both Jalen and his [older] brother would be in the fieldhouse.

"Once I got into coaching at Utah, I would go and visit his dad's school after he became a head coach, and recruit. Throughout the years we actually built a great relationship.

"When Jalen was in high school and I was coaching at Mississippi State, we recruited him really hard and tried to get him there. But he ended up going to Alabama and having a great college career."

The Eagles hired Johnson because he was one of college football's top young offensive minds and teachers, not because he knew Hurts. But that connection probably didn't hurt.

The Eagles are Johnson's first NFL job. But his success as a quarterbacks coach and offensive coordinator at SEC schools Mississippi State, where he coached Dak Prescott, and the University of Florida earned him two Division I head-coaching interviews late last year [South Carolina and Boise State].