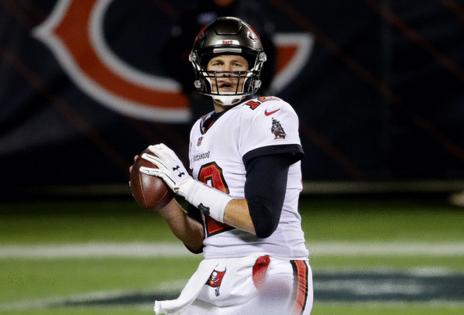 During a podcast on Hodinkee radio, the quarterback said it kept him from working on developing other parts of his game. He said he also was struggling to learn the playbook midway through the season while utilizing a wristband.

Brady, who has been rehabbing from surgery on his left knee, is expected to begin throwing footballs again next week.

It’s uncertain whether those sessions — which are sure to include Bucs quarterbacks Blaine Gabbert, Ryan Griffin and Kyle Trask, and many of his receivers and tight ends — will be held at the AdventHealth Training facility, Berkeley Prep or somewhere else.

Brady made an impassioned plea during an NFL Players’ Association conference call last week for players to stick together and “boycott” voluntary offseason workouts until the union can hammer out a new agreement with coaches and teams.

But Brady is going to get his work done, and his teammates will be there with him. He’s looking forward to being healthy, because he says the knee was a problem throughout the year and took a lot of his time that could’ve been spent on other areas.

“I had a pretty serious knee surgery this offseason, which is the first surgery I’ve had in about 12 years,” Brady said on the podcast. “I was really interested to see how it was going to go, because last year it just took a lot. Every week I was kind of tending to my knee, and I thought I would love to see a season where I can focus on some other strength stuff that I want to do, some other technique stuff where I’m not just focused on protecting my knee all the time.

“So It’s been pretty intense this offseason from that standpoint, because it’s been six and a half weeks that I’ve been dealing with the rehab process. The season went pretty long, obviously into February. It’s just now that I’m starting to feel like the offseason is happening. And I’m going to blink my eyes and the offseason is going to be over.”

Brady took a huge chance leaving the Patriots after 20 seasons and six Super Bowls to sign with the Bucs, a team that hadn’t made the playoffs in more than a dozen seasons. To complicate matters, the COVID-19 pandemic prevented him from having a regular offseason, preseason games and training camp.

Brady said he struggled to learn the Bucs playbook after two decades in the same system with the Patriots and still had to rely on a wristband midway through the season.

“Exciting. Scary. I was anxious. I wanted to get to work,” Brady said. “There was a pandemic. We couldn’t even meet as coaches and players. I was getting anxious I wouldn’t know the playbook. Training camp was started. I barely knew the plays, and midway through the year I was still trying to figure out how to call plays. I would just read them off my wristband and try to visualize how they happen.

“Things like learning a new language. You spoke in English for 20 years and someone goes, hey man, let’s go, let’s speak some Spanish. And you’re like, ‘huh?’ That makes no sense to my brain. And slowly but surely, that starts to work and you gain a little trust. You go back to what worked, and you’re trying to embrace anew and most people meet in the middle.”

Brady restructured his contract to give the Bucs some salary-cap space to retain their free agents. He also added a year and could play through 2022, when he will be 45.

“I took on a big challenge going to Tampa,” Brady said, “and I don’t think that final story has been written yet.”

That challenge resumes next week, with Brady throwing the football again.

TAMPA, Fla. ― The calendar is circled on Oct. 3. Not just because that’s the date Tom Brady will return to Gillette Stadium to play the New England Patriots. It also just happens to be Bruce Arians’ 69th birthday.

CHICAGO — Gone are the days of the Chicago Bears talking about the potential of a breakthrough for Anthony Miller.

The wide receiver showed promise in his rookie season of 2018 after the team traded up in Round 2 to ...Read More

SAN DIEGO — The National Football League has quit tiptoeing through its two lips on the COVID-19 issue and put ...Read More

TAMPA, Fla. — Tom Brady gave a rousing speech at the Bucs’ ring ceremony Thursday night that will be remembered for years to come.

Not only did he thank the Glazer family that owns the Bucs and his coaches, he ...Read More

PITTSBURGH — I can't believe what I am hearing about the Steelers.

Porky Pig is going to be their quarterback this season?

That seemed to be the conclusion on Twitter after the team posted a picture of Ben ...Read More

This is not exactly a column about Ted Ginn Jr. retiring. He did so recently after 14 NFL seasons, showing the rare speed and relentless work ethic that made then-Dolphins general manager Randy Mueller draft him in 2007.