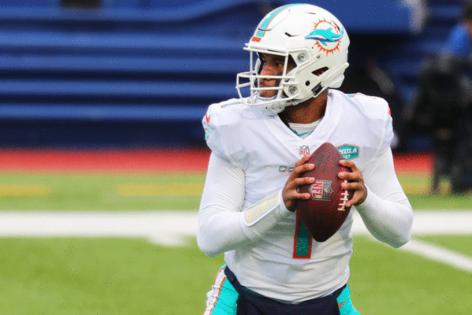 MIAMI — Quarterback Tua Tagovailoa didn’t participate in the Miami Dolphins’ rookie minicamp on Friday — high draft picks in their second season typically don’t — but he’s on a “mission” this offseason to improve.

That’s according to Nick Hicks, his South Florida-based trainer.

Appearing on the Miami on the Rockets podcast, Hicks said: “Tua is an amazing person. I’ve never met anybody like him. He’s an insanely hard worker. He’s all gas, no brakes.

“I show up at his house super early; we put in work. Little break, then he leaves me at the field and he works some more. Then he goes home and watches film. He’s on a mission. He’s different.”

Tagovailoa finished his rookie season with a 6-3 record in nine starts, with 11 touchdowns, five interceptions, an 87.1 passer rating and an average of 200.5 yards passing in his nine starts.

Asked specifically what he and Tagovailoa are doing, Hicks said: “I’m not allowed to talk too much about Tua, because we had a specific ideology of what this offseason is going to be. There was so much doubt. ... We’re trying to keep things under wraps.”

But Hicks noted strength and confidence are areas among the keys for his success.

“A healthy Tua is a confident Tua and a confident Tua is a Super Bowl contender guaranteed,” Hicks said. “And that’s our goal to make him healthy. And we’re doing a damn good job right now.”

Tagovailoa sustained a serious hip injury at Alabama in a game in November 2019, but the Dolphins said he was healthy and available all last season. He did not end the season with any injury that was disclosed by the team.

Dolphins receiver Jaylen Waddle, who played with Tagovailoa at Alabama, said he has been in touch with the second-year quarterback for input as Waddle learns the playbook.

“I call him and he gives me advice, helps me out,” Waddle said.