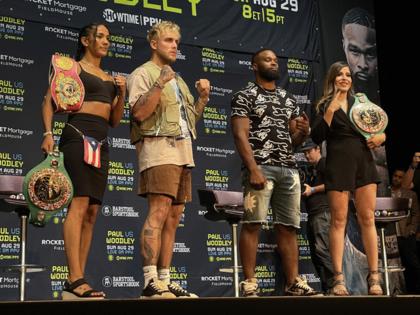 LOS ANGELES — Confidence oozed from Tyron Woodley as he shared a stage with Jake Paul on Tuesday afternoon to announce their Aug. 29 cruiserweight fight in Cleveland.

"I saw a man who doesn't really have fight left in him," Paul said, beating the MMA fighter to the punch. "I saw a man who's been defeated multiple times now and will be finished and sent into retirement by a Youtube Disney star boxer."

"Keyword, you saw a man, something you're not," Woodley counterpunched. "You're a problem child."

Tuesday afternoon's news conference, held at The Novo in downtown L.A., brought the expected verbal fireworks between Woodley, who will be making his boxing debut, and Paul, who will be fighting for the fourth time.

But there was reflection, too, from the 39-year-old Woodley, who told the story of an upbringing in Ferguson, Mo., where he went from broke and evicted to MMA stardom and a lavish life that provided his children with an upbringing that he didn't get to experience.

"My son's a 4.0 [GPA] student getting recruited by Yale, Division I prospect [in football]," Woodley said. "My daughter's a phenomenal artist; she's T-Pain Jr. She will blow your mind at 6 years old on autotune. My son's a select soccer player.

Woodley needed a new journey, he said, a new career. Boxing offered him something that UFC, where he had a 19-7-1 record, no longer did.

Multiple times throughout the news conference, he said that win or lose, he plans to be in boxing for a while (his opponent will have some thoughts on the subject later). He's received training from Floyd Mayweather, who adjusted Woodley's mindset and tweaked his stances to better prepare him for the fight. Mayweather, of course, knows the Paul brand well, having fought Jake's fellow YouTubing brother Logan in Miami in June.

The Nevada State Athletic Commission will no longer punish fighters who test positive for cannabis.

BALTIMORE — Sugar Ray Robinson is still considered the greatest pound-for-pound fighter of all time by many boxing historians.

Robinson was nigh unbeatable at welterweight (147 pounds) and middleweight (160 pounds), ...Read More

LEXINGTON, Ky. — Just as it has to be daunting for a contemporary author to choose to write about Abraham Lincoln, so must it be for documentary filmmakers to select Muhammad Ali as a subject.

When it comes to the two ...Read More

Don’t call it a comeback.