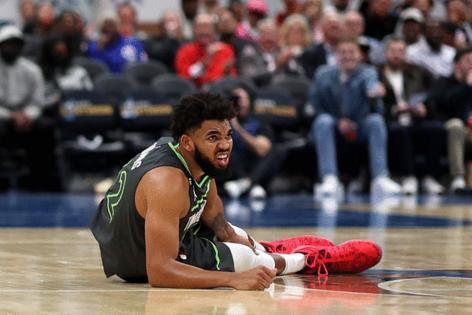 Towns suffered a right calf strain in the third quarter of the team's 142-127 loss to the Wizards on Monday.

Towns began running down the floor on defense when a few steps into his stride, he pulled up, grabbed the back of his right leg and fell to the floor with 5 minutes, 25 seconds remaining. A few moments later, center Rudy Gobert and head athletic trainer Gregg Farnam helped him back to the locker room. Towns could not put weight on his right leg.

Before the start of the fourth quarter, and after some nervous moments for the fanbase, the team announced it was a right calf strain and Towns would not return. There was no immediate word on how Towns might be out, but the Wolves seemed to escape the worst-case scenario of a season-ending injury with the initial diagnosis.

For instance, point guard Jordan McLaughlin was out because of a left calf strain and is considered day to day.

The Wolves' play was again concerning on Monday. They against looked lifeless on defense in their third consecutive loss after the Warriors blew them out on Sunday. Minnesota trailed by as much as 27 in the second quarter before cutting the Washington lead to eight in the third. But their defense couldn't stop Wizards from working magic on offense the rest of the way.