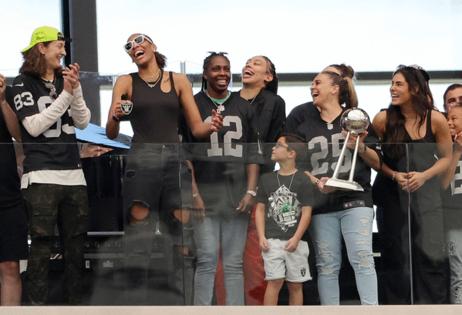 Plaisance, a 2022 WNBA champion with the Aces, had finished giving her talk about 20 minutes earlier. But after speaking to some of the Bishop Gorman student-athletes about work ethic, sacrifice and persistence, Plaisance was surrounded by a group of 10 girls who had more questions about her life, the path to the WNBA and being a professional athlete.

“It was a perfect opportunity,” Plaisance said.

This trip to Bishop Gorman is just part of a day in Plaisance’s offseason life. Now that the championship buzz and celebration hangovers are gone, the nine-year WNBA veteran is settling into her offseason regimen like the rest of the title-winning Aces.

Plaisance is one of three players spending a majority of her time in Las Vegas after the 2022 championship. Several members of the team are already playing for other club teams abroad, while others are recovering from national team duty or training across the country.

Communication between the team and its players all across the globe is just one of the unique challenges WNBA teams face. However, Plaisance assures the Aces group chat is still active.

“This is going to be a special group that’s going to keep in touch for our lifetimes,” she said.

The Aces’ forward wraps up answering questions from the high school students in the cafeteria. She’s already given this speech at least two times today to an earlier group of Gaels athletes and to students at Centennial, just an hour earlier. But Plaisance is happy to stick around and answer the final questions.

“For me,” Plaisance said, “to be out here to train, but also share my story and help display the Aces and who we are as a group, I think it’s really important.”