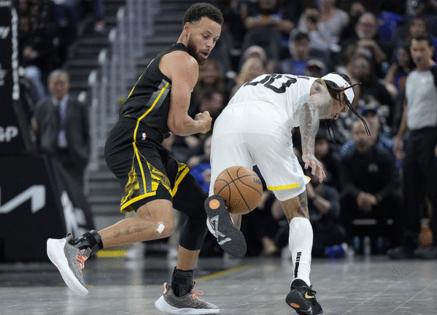 Utah came to Chase Center a surprising contender in the Western Conference – despite trading its two superstars Rudy Gobert and Donovan Mitchell in the offseason – boasting a deep bench and an offense that runs a similar run-and-gun style to Golden State.

Jordan Poole came alive in the second half, scoring 19 points with 2 3-pointers (on eight attempts).

The Warriors put together a 37-23 lead after the first quarter, their starting unit’s offense singing and making stops. Helping, too, was Utah’s poor shooting. They shot 2-for-15 from 3 in the first quarter and 4-for-26 in the second half. But they didn’t need a good shooting night to make it interesting.

Even with Draymond Green heading up the non-Curry minutes to start the second quarter, the Jazz cut into that lead. The Warriors headed to the half with an eight-point lead. Curry led the way with 17 points on 7-of-14 from the field.

A Thompson flurry fueled the Warriors’ third quarter. With the Jazz closing in on the lead, Thompson hit four 3-pointers within the final four minutes of the quarter to give them an 11-point lead into the final frame.

Jonathan Kuminga replaced Anthony Lamb in the Green-led rotation – also featuring Poole, Donte DiVincenzo and Wiggins – that started the Warriors’ previous two wins. A struggling Poole found his stride in the fourth quarter, helping extend the lead to nine points before Curry reentered with just under eight minutes remaining to help the Warriors pull away for good.