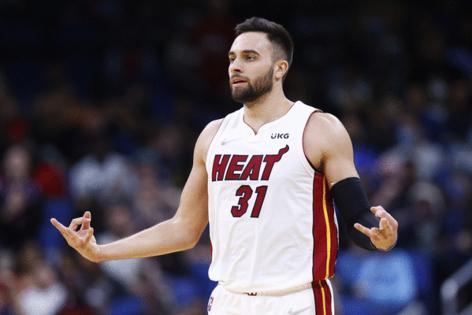 Just as Bird Rights stand as homage to Larry Bird and the rule designed to entice free agents to remain in place, and just as the Arenas Provision dates to Gilbert Arenas and a salary-cap workaround for restricted free agents, there now is a Strus Rule.

Well, not officially. But perhaps that element only is a matter of time.

Because of the lengthy delay in the time it took for the announcement during Game 7 of last season’s Eastern Conference finals that a successful Strus 3-pointer, upon video review, had been nullified by an out-of-bounds ruling, the NBA this season has changed the way such notifications will be handled.

“Clearly the Max Strus play in Miami highlighted that time that passes between the event and the dead ball,” NBA officiating supervisor Monty McCutchen said during a media seminar.

So now, rather than waiting for the next dead ball or timeout, once the NBA Replay Center determines a scoring change is necessary, a blue light will illuminate on the scorers’ table. Play then will be stopped during a “neutral” moment during the action, when neither team has an advantage in a potential scoring situation.

“The announcement will be made, and the ball will immediately be put into play under the conditions that existed before,” McCutchen continued. “We think that will take significant time off the announcement, allowing for the teams to have the best information possible to make the best schematic changes that they would like to, strategy changes that they would like to.”

The irony is that Strus saw it coming (even if he still doesn’t agree with the ruling of his stepping out of bounds).

“My brother did say to me after the game, ‘You’re going to have your own rule named after you,’ " Strus told the South Florida Sun Sentinel, with the Heat shifting from their Bahamas training camp to work back at FTX Arena. “So I guess there’s that. He spoke that into existence.”