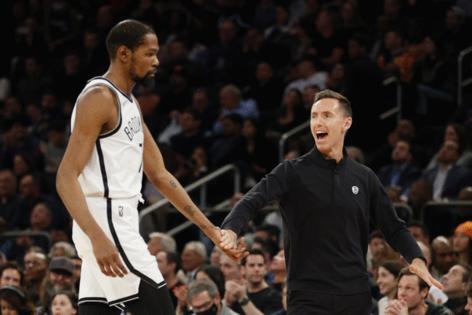 NEW YORK — As Kevin Durant and the Nets enter the next stage of their stalemate, there’s one important detail to keep in mind.

As much as both sides would hate to admit it, they need each other and would be worse off in the aftermath of a messy divorce.

If Durant gets his wish and is traded, that means a team gave Brooklyn a package beyond its wildest dreams, a package that far supersedes the grift the Utah Jazz pulled off in the Rudy Gobert deal. As a reminder, Gobert is a premier defensive player with a limited offensive skill set, and the Jazz got four draft picks, a pick swap, four role players and 2022 first-round pick Walker Kessler in the deal.

If that’s what the Jazz got for Gobert, a one-dimensional player, you can understand why the Nets want the kitchen sink, the stove, the island, the fully-stocked refrigerator and the dining room table in a deal for Durant.

But every contender — and potential Durant suitor — knows that meeting Brooklyn’s asking price means effectively gutting their roster, and gutting the roster means surrendering the requisite depth history has proven is necessary to contend for a championship. Few teams can surrender an All-Star, two role players and significant draft compensation and still have a roster that can bang with the league’s heavies. The Boston Celtics are one such team, but they would have to give up both Jaylen Brown and Marcus Smart in a Durant deal, and Durant reportedly only wants to be traded to the Celtics if Smart is on the roster. The New Orleans Pelicans are another team and the New York Daily News reported their interest in a Durant deal, but it remains unclear if they are willing to trade star forward Brandon Ingram.

And if the Nets are able to pull off a deal, that means they’ll have traded one of the best players on the planet for a player several tiers below him, plus role players. It means after years of selling their fan base on championships, they will have willingly pulled an about face in the name of “taking back control” of their franchise.

It would be unforgivable, and it would firmly remove the Nets from championship contention, because it was Durant’s greatness — not Steve Nash’s coaching or Sean Marks’ managerial skills — that forced the eventual 2021 NBA champion Milwaukee Bucks to Game 7 without Kyrie Irving and with a one-legged James Harden.

It is Durant’s greatness — not Nash’s coaching skills or Marks’ managerial prowess — that gives the Nets a chance to win every game when he’s on the floor. Case in point: The Nets tanked from first to 10th in the Eastern Conference when Durant missed a month and a half of action with a sprained MCL last season. Irving was available for the road games during that stretch, and Harden, though disgruntled, still played in many of those games.

Not only would moving on from Durant remove the Nets from championship contention, but moving him for one of the subpar packages available would set the Nets back another four to five years minimum, a decade at worst. It would mean they traded D’Angelo Russell, Caris LeVert, Spencer Dinwiddie and Jarrett Allen for a team built around Ben Simmons — fresh off back surgery — and another player of his caliber. It would mean they so desperately want autonomous control of their organization that control has supplanted winning as Nets owner Joe Tsai’s only religion.

The Nets would no longer dominate headlines and airwaves. That tide is already shifting with the Knicks’ acquisition of Jalen Brunson and pursuit of star guard Donovan Mitchell. In fact, the Knicks look functional these days compared to the Nets, who would certainly no longer be perennial championship contenders.