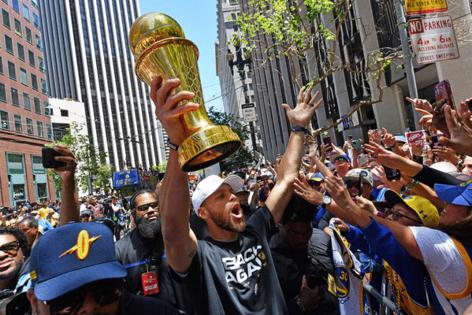 And that is exactly what Stephen Curry is — and now, the host nod is his, too.

Curry will be the host for the annual sports awards show, which will air on ABC on July 20, which ESPN announced on Wednesday. He’s just the ninth athlete to ever host the ESPYS and only the fifth athlete to be the sole host of the awards show.

“I’ve had the pleasure of attending The ESPYS but never imagined I’d have the privilege of hosting this special event,” Curry said in a press release announcing the gig. “As someone who loves the intersection of sports and entertainment, I look forward to delivering an exciting show for the fans while we celebrate the athletes who created the top moments of the year.”

Curry will also be up for several awards during the show, including Best Athlete, Men’s Sports, Best NBA Player and Best Record-Breaking Performance for his breaking of the 3-point record. The Warriors also have Klay Thompson as a nominee for Best Comeback Athlete and the team as a whole for Best Team.

Even with adding his fourth NBA championship and getting first-ever Finals MVP award, there’s no rest for Curry in the summer. His UNDERRATED company is hosting a junior golf tour, which is beginning its second of five summer tournaments in Phoenix on Wednesday.

He’s also set to once again golf himself at the American Century Championship in Lake Tahoe from July 8-10, where he’d like to add another trophy to his collection. He’s previously golfed with his dad Dell and brother Seth there, too.

But now, Curry has hosting duties to add to his July work calendar, and it’s a rare honor in the 30-year run of the ESPYS show.

Previous athletes to be the solo host the ESPYS are Lance Armstrong (2006), John Cena (2016), Peyton Manning (2017) and Danica Patrick (2018). Additionally, LeBron James was host in 2007 alongside Jimmy Kimmel and Russell Wilson, Megan Rapinoe and Sue Bird hosted the lone virtual ESPYS show in 2020.