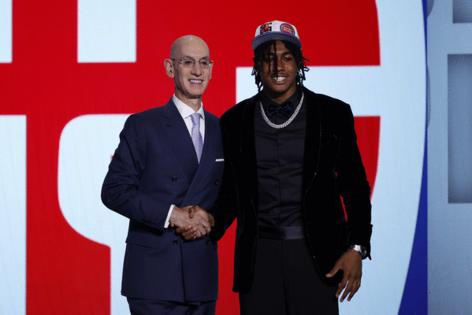 GM Troy Weaver was determined to make his team more athletic, quicker, bigger. He wanted a running mate for backcourt star Cade Cunningham, and also a bigger interior presence. He didn’t have to wait long to get what he wanted.

This was an impressive and perhaps franchise-shaping haul, and with the pending free-agency period, more is likely to come. It was a crazy night from the start, and as he tends to do, Weaver took advantage.

Ivey wasn’t the top-rated player in the draft but was considered the most athletic with one of the highest upsides, and Weaver happily grabbed him at No. 5. The Pistons didn’t even have to maneuver to land him. The 6-4 guard handled that part of it, making it clear Detroit was his preferred destination, and he worked out only for the Pistons and Orlando.

Later in the first round, Weaver went back to his aggressive ways, acquiring talented 6-11 Memphis center Jalen Duren, who was Charlotte’s pick at No. 13. The Pistons also received Knicks guard Kemba Walker, while surrendering the first-round pick they acquired in the Jerami Grant trade the day before. That deal freed up salary-cap space to facilitate the Hornets deal.

Essentially, Weaver got a lottery pick (Duren) for Grant, plus Walker, 32, and his expiring contract (one year, $9 million). The Pistons are planning to buy out the contract, but the trade can’t be official until the new league year starts July 6.

This is how dominoes fall, and this is how Weaver envisioned making it happen. When Sacramento took Iowa’s Keegan Murray instead of Ivey at No. 4, Weaver had one thought: “Let’s cash in.”

At the draft in Brooklyn, Ivey expressed similar eagerness and glee. But first there were tears, as he fell into his mother’s arms and sobbed.

“I wanted to come to Detroit, but I don’t dictate the draft,” Ivey said. “I didn’t know where I’d go, and when they told me, I just broke out in tears. … Dream come true for sure. Just coming from my background, my family has Detroit ties. When I heard my name called, just an honor. It felt like home, a special place to be.”