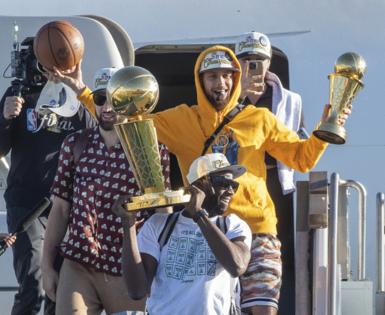 The Warriors are atop the NBA once again.

This status, once unimaginable for this organization, has become so commonplace that forward Draymond Green was calling the NBA Finals the “Warriors Invitational” Thursday night after Golden State’s fourth title — and sixth championship-round appearance — in eight years.

Because the Warriors’ championship this year wasn’t expected, every reason will be given between now and next June as to why the Dubs will be a one-term title winner.

But there’s no reason to believe the Dubs can’t win again next year.

“I feel like next year we’re going to be even better,” Warriors forward Andrew Wiggins said Saturday.

Let’s start with the astonishing but verifiable fact that when Green, Klay Thompson and Steph Curry start every game of a playoff series, the Warriors have never lost.

Nope, not one series.

That’s a run that dates back to the 2015 playoffs. And until that streak ends, it would be foolhardy to pick against the Warriors.

With this team’s veteran core, an impressive young core and Wiggins emerging as one of the NBA’s best wings, the Warriors are built for success, not just for next year, but for many years to come.