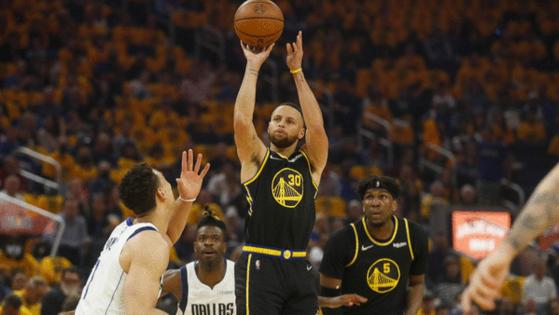 I’ll admit it. I thought the Warriors dynasty was finished. I was there the night in Toronto when it turned, when I declared the dynasty kaput, ironically during a Warriors victory in Game 5 of the NBA Finals.

The moment is easy to remember. Kevin Durant, the reigning two-time NBA Finals MVP, hobbled off the court with a torn Achilles, leaving Drake distraught and Bob Myers in tears.

The snowball descent was rapid.

So it was a great run, I thought, and perhaps there was a Warriors curse at play for leaving their longtime home in Oakland for San Francisco’s posh tech money in 2019.

But here we are in 2022 writing about the Warriors and their 1-0 lead in the Western Conference finals. We’re writing about Curry, at 34 years old, grabbing 12 rebounds with 21 points in a 112-87 blowout Wednesday night over the Mavericks.

We’re writing about many of the old crew (Curry, Thompson, Draymond Green, Kevon Looney), but also a core of newcomers (Jordan Poole, Andrew Wiggins, Otto Porter Jr.). Like the third and final act of the Spurs dynasty in the mid-2010s, the Warriors retooled with shrewd moves on limited assets. They never acquired a player of the caliber of Kawhi Leonard like San Antonio, but Poole and Wiggins are gems for their price and fit.

Poole is especially revelatory considering he was the 28th overall pick in 2019 and is now averaging 19.3 points in the playoffs. But Wiggins was more important to the Wednesday’s victory because of his lockdown defense on Luka Doncic, holding the Slovenian to 20 points on 6-of-18 shooting.

“It started with Andrew,” Thompson said. “He was moving them puppies tonight. I just think our ball pressure and our help defense was spectacular tonight.

“That’s why he was the No. 1 pick,” Thompson added of Wiggins, who was the top choice in 2014 but has largely underwhelmed as a pro until finding a complementary fit with the Warriors. “You can’t teach that athleticism. You can’t teach that length. You can’t teach his timing. I’m just happy the world is getting to see who he really is. That’s an incredible wing player. He will be like this for the next 10 years.”

To be clear, the series is hardly over. The Mavericks, a team built around 3-point shooting, converted a miserable 11 for 48 from beyond the arc Wednesday, including several wide-open bricks. That won’t happen again. Jalen Brunson’s ugly night (6-for-16 shooting, 0-for-5 shoting on 3s) was an anomaly in his tremendous postseason. Dallas coach Jason Kidd, along with his top assistant Sean Sweeney, have already uncovered the adjustments to recover from deficits in the first two rounds. They’ll find a way to unlock Doncic from Wiggins.

“They did a really good job. Wiggins picking him up full court,” Kidd said. “They went box-and-one, they went zone. We understood coming into the series that we were going to see that. We’ll go back and look at the video and see what we can do better.”

But there was also something vintage about the Warriors’ performance and this run. Something about their swagger and on-a-string defense and ball movement that gives off the vibe they’re ready to resurrect a dynasty.

No matter how it’s spun, there’s a lot at stake for the Warriors. Green is 32 years old with a bad back. Curry is older and a first Finals MVP would elevate his legacy to Mount Rushmore conversation. Thompson underwent two recent major surgeries.

As the Warriors understand better than most, the future isn’t a given. And in this case, the bright present required a heckuva comeback story.