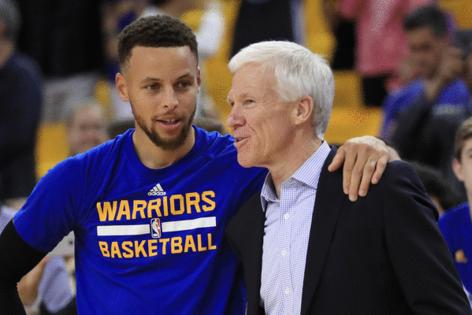 It took 13 years, but Steph Curry made good on his promise.

Curry was a baby-faced 21-year-old in 2009 when he decided to skip his senior year at Davidson College in favor of entering the NBA draft a year early.

When he did that, Curry vowed he would return to school and earn the seven courses he needed at the time to earn his degree — one day.

“One day” arrived Sunday, when Curry, now 34, was announced as a member of Davidson’s Class of 2022.

Curry wasn’t actually there. But Davidson coach Bob McKillop was, beaming with pride as he held a cardboard cutout of Curry among the five Davidson players and two Davidson men’s basketball managers who also graduated with the class of 2022.

“Steph made a commitment to Davidson and to his parents that he was going to graduate,” McKillop said in a phone interview Monday. “This was a superb, remarkable story about honoring a commitment, something that again shows that Steph prominently displays character traits that are so absent in our world today. .... He is a multi-millionaire, and yet he still takes the time to finish his education.”

The graduation should also remove the final roadblock from the retirement of Curry’s No. 30. Davidson has long had a policy of only retiring the numbers of players who graduated, even two-time NBA Most Valuable Players like Curry.

Now that Curry has a diploma, it makes all the sense in the world to officially award Curry his degree this summer following the NBA Finals and announce his number is being retired at Davidson the very same day.

That’s the way Davidson should handle it — two joyous celebrations for the price of one — and that’s the way it will likely go. Retire the man’s number, and the sooner the better.

Curry wasn’t at Sunday’s ceremony for understandable reasons, although lots of applause rang out when “Wardell Stephen Curry II” was announced as a graduate “in absentia.” Curry is in California, preparing for the Western Conference finals as his Golden State Warriors try to win their fourth NBA championship with Curry as their leader.