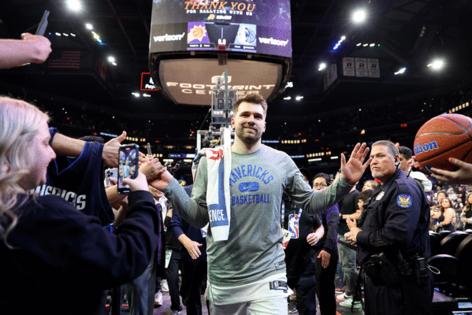 SAN FRANCISCO — The Dallas Mavericks’s dominant performance in Game 7 of the Western Conference semifinals series Sunday against the Phoenix Suns was a look at what’s to come for the Warriors.

The Mavericks, behind superstar Luka Doncic, sent the Suns packing for their end-of-season vacations much sooner than anticipated with a Game 7 victory. Dallas kept Phoenix to just 27 points and outscored its opponent by 30 at the half en route to the Mavericks’ series-clinching victory over the league’s best team during the regular season.

The 64-win Suns was the more balanced team of the two, but the Mavericks proved they’re a force to be reckoned with.

And the Warriors better take Sunday’s rout as a warning after they advanced to their first Western Conference finals in three years following a rocky series against the young and athletic Grizzlies that was defined by up-and-down performances and drama that spilled into post-game press conferences.

Led by Stephen Curry, Draymond Green and Klay Thompson, the Warriors have far more experience at this stage than the Mavericks, who are making their first conference finals appearance in a decade. But Dallas got a major confidence boost after obliterating the Suns Sunday.

“This is what the playoffs are about, every opponent at this stage is going to pose a huge threat because only the best teams are left… so it’s all about figuring it out,” coach Steve Kerr said Sunday. “And I thought our team and our staff did a really good job kind of over the course of games 4, 5 and 6 of making that adjustment to the way the series had shifted and kind of finding a way to get through.”

Here’s what to know about how the Warriors may match up with Dallas:

Does the regular season record really matter? The Warriors have already proven twice this postseason that it doesn’t, considering the Nuggets and Grizzlies, whom Golden State beat in the first and second rounds, also posted a 3-1 record against them this season.

At any rate, the Mavericks had the edge during the regular season, winning the last two contests by a combined 15 points. But the Warriors spanked Dallas in their second meeting in late January to the tune of 130-92.