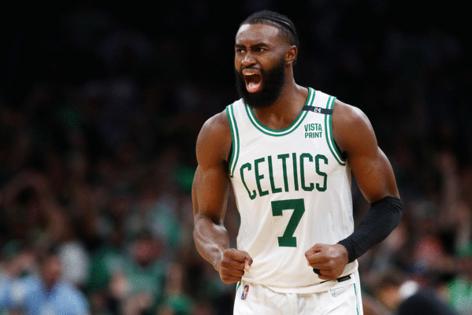 BOSTON — Over seven games, 15 nights and 336 minutes, the Bucks tried to frame their second-round series with the Celtics as a bet.

That they could successfully isolate Jayson Tatum and Jaylen Brown against Giannis Antetokounmpo, the greatest player in the world, and Jrue Holiday in a tilted contest of stars.

That Boston’s role players couldn’t rescue Tatum and Brown, even when left alone to make 3s from the corner. That Grant Williams and Derrick White would, in fact, shoot enough 3s to hurt their own team instead of Milwaukee and hand over the series.

The Celtics sent the betting Bucks packing with a 109-81 blowout in Game 7 before an explosive afternoon crowd at TD Garden. Williams trumped Tatum’s 23 points with a game-high 27, six rebounds and two blocks. He drilled seven 3-pointers and broke the NBA record for most 3-point attempts in a Game 7 with 18.

“I told (Williams), ‘let it fly,” Celtics coach Ime Udoka shared post-game. “They were disrespecting you more tonight than earlier in the series.”

Boston will now meet the Heat in Game 1 of the Eastern Conference Finals on Tuesday in Miami at 8:30 p.m.

The Celtics led for the entirety of Sunday’s second half, thanks to a defiant and defining third-quarter stretch.

After Tatum picked up his fourth foul with a 10-point lead and 7:44 left in the quarter, Boston deployed a lineup it had used in just eight regular-season games and 26 postseason minutes. White came off the bench for Tatum to join Williams, Brown, Smart and Al Horford, veterans in arms against the defending champions. What should have been Milwaukee’s runway to a tied game became a trap door to elimination.