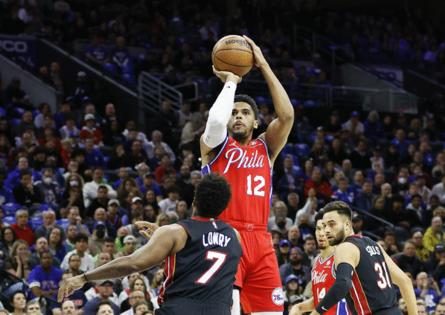 There was a moment in the second half of this signature Miami Heat night, this beautiful Thursday night, when the television camera swung to a seated Pat Riley, who arched his neck and lifted his chin and offered the angular idea of an eagle surveying his constructed world.

What was it the poet wrote, about this being your created world — about holding everything that’s in it?

Below on the court in Game 6, Miami Heat coach Erik Spoelstra was a star again, not just by strategic ideas like triple-teaming Philadelphia’s best into submission but small-name players like Max Strus and Gabe Vincent outplaying their pedigreed Philadelphia counterparts, James Harden and Tyrese Maxey.

If you’re tired of egos, exhausted by money, frustrated by the laissez-faire world of pro sports, this was your night. This is your team. This is the antidote of so much that turns you off.

Strus and Vincent climbed the hard way. Strus played in what we’ll call Division 0 — Lewis College outside Chicago — before going undrafted. Vincent, too, went undrafted and played for the Stockton Kings. Not the Sacramento Kings of the NBA. The Stockton Kings of the developmental G League.

They started with belief in themselves and nothing else. Do you have that in yourself? Can you ride that to a built career?

Strus and Vincent, these two non-names, didn’t play against the $171 million contract of Harden and 2020 first-round pick of Maxey in this Heat win in the second-round series.

They flat-out embarrassed them.

“I think that was Max’s first double-double in his life,’’ the Heat’s pit bull, P.J. Tucker, said in looking at a statistics sheet showing Strus had 20 points and 11 rebounds.