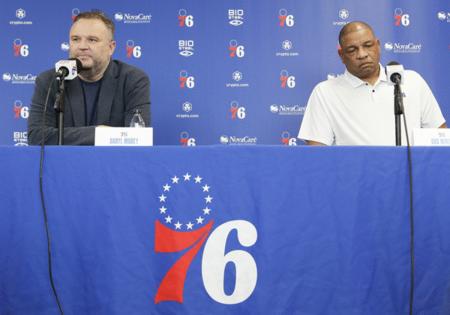 “He’s a great coach,” Morey said one day after the Sixers were eliminated by the Miami Heat in the second round of the NBA playoffs. “I love working with him. I feel like I’m learning from him.

“I think Elton [Brand, general manager] and I and him make a great team. And we’re going to see where this journey takes us. But we feel very good about where it’s going to take us, and it’s going to be where we have a chance to win the title.”

Rivers’ five-year contract runs through the 2024-25 season. Reports this season had indicated that Rivers could be replaced by Mike D’Antoni if the Sixers didn’t advance far in the postseason.

D’Antoni, Sixers point guard James Harden, Morey, and Sixers CEO Tad Brown all worked together with the Houston Rockets. Harden won the 2018 MVP and three scoring titles while D’Antoni was the Rockets coach, Morey the GM, and Brown the CEO.

There was a sense that Harden could return to that elite level of play with D’Antoni as the Sixers’ coach.

The Sixers hired Rivers in October 2020 to bring a championship to the organization. He was hired a month before Morey arrived as team president.

The Sixers have suffered back-to-back second-round exits during their tenures. Last season, the Sixers headed into the postseason as the No. 1 seed in the Eastern Conference.

Despite that, their season ended with a 103-96 Game 7 loss to the Atlanta Hawks in the conference semifinals. Then on Friday, they were eliminated with a 99-90 Game 6 setback to the Miami Heat.

The Sixers have won just once in their last 12 second-round appearances dating to 1986. That was when they beat the Raptors in seven games in 2001 en route to finishing as NBA Finals runners-up.