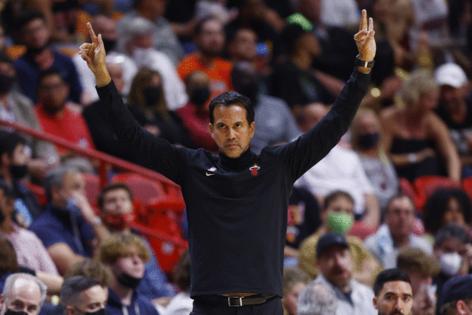 MIAMI — How hot were the Miami Heat at home entering Friday night’s game against the Atlanta Hawks?

Drake spent the game seated across from the Heat bench as they went for a seventh consecutive FTX Arena victory.

From there, he watched former Toronto Raptors buddy Kyle Lowry and the Heat continue their torrid run, with a 124-118 victory over the Hawks.

With Jimmy Butler returning to score a decisive late basket, the Heat overcame blowing an early 17-point lead and recovered from a seven-point fourth-quarter deficit to make it nine victories in their last 11 games.

Back from his ankle sprain, Butler closed with 23 points and 10 assists. There also was a 17-point, 11-rebound double-double from center Omer Yurtseven, as well as 24 points from Tyler Herro, 16 from Max Strus and 13 points and eight assists from Lowry, who passed Kobe Bryant for 31st on the NBA all-time assist list.

— 1. Closing time: The Heat went into the fourth quarter down 99-94, trimming one point from their halftime deficit.

A four-point possession later trimmed the Heat deficit to 112-111 with 4:33 left, after Herro converted a free throw on an away-from-the-ball foul and then drained a 3-pointer. A minute later, Lowry tied it 114-114 with a 3-pointer.

A pair of Trae Young free throws later moved the Hawks to a 118-116 lead, before P.J. Tucker got to the line for the Heat with 1:23 remaining for his first free throws of the night, converting both for a 118-118 tie.

From there, Caleb Martin drew a charge on Young with 61 seconds to play, with Herro then getting to the line with 46 seconds to go, making both for a 120-118 lead.