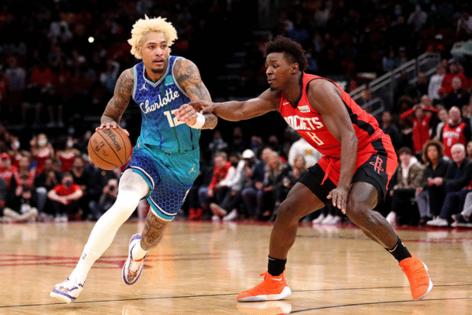 “It’s a trap” is another way to describe the Hornets’ situation, given their matchup with Houston represented the proverbial trap game. With Charlotte riding the coattails of a stretch in which it had won eight of its previous nine games, facing the second end of a back-to-back and taking on the league’s worst team, all the ingredients were there for a serious letdown.

Moments like these are the ones that James Borrego had spoken with his team about in his own way, discussing the perils of being too satisfied.

“In the NBA, you’re not taking anybody lightly, first of all,” the coach said before tipoff. “We’ve got to have that appropriate respect for this team. We’re not playing a record. They can go win a basketball game and they just played their best game of the season last time I checked. So in general our goal right now is to not be complacent. It’s about curiosity. I talk to our guys about that a lot. Complacency vs. curiosity.”

Whether complacency was an issue against Houston will be a topic for debate. The Hornets needed a furious fourth-quarter rally just to send it to overtime, but still succumbed to the Rockets 146-143 at the Toyota Center in Houston after Kelly Oubre’s potential game-winning 3-pointer spun out with 3.1 seconds remaining.

Here are three things we learned in the Hornets’ loss to Houston:

Reversing their defensive trend is one of the reasons for the Hornets’ turnaround. Charlotte has dug in much better on that side of the ball, limiting its opposition to under 100 points in three of its last eight outings.

But the Rockets feasted on the Hornets from the opening tip, making a season-high 23 3-pointers, posting 73 first-half points and shooting 53.8%. That included a 55% mark beyond the arc. The Hornets yielded 43 points in the first quarter — Houston’s best scoring quarter of the season by seven points — and were aggressive in getting to the free-throw line, taking 15 of them in the first half. Christian Wood nearly registered a double-double in the first quarter, pumping in nine points and hauling in nine rebounds. Wood had five dunks through a quarter and a half.

With Mason Plumlee missing his second straight game with a calf strain, something Borrego termed as “precautionary” with the Hornets’ starting center, it represented another opportunity for PJ Washington or Nick Richards to take advantage of some extra rotation minutes.

Washington didn’t quite get it going until late, similar to what he did against Minnesota on Friday, when he had 17 points. He had 13 points with six assists and five rebounds, and had a crucial put-back on LaMelo Ball’s 3-point miss just at the end of regulation, which squared the game and sent it into the extra session.

Richards, continuing his incremental insertion in the lineup, was solid with a modest three points and two rebounds in his limited seven minutes.

LaMelo racks up another

Another game, another meaty night statistically for LaMelo Ball.

He recorded his second triple-double of the season and third of his career with 19 points, 13 assists and 11 rebounds. His potential game-tying 3-pointer at the end of overtime caromed out.

But he’s quickly picked up a knack for collecting double-doubles and yet again showed he can do it all on the offensive end.