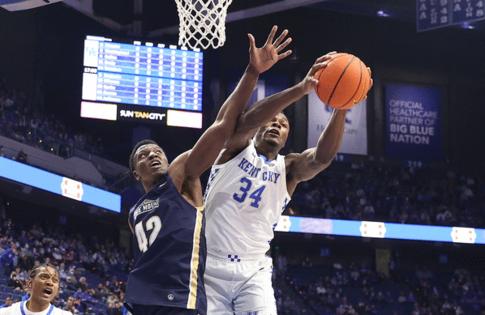 It’s a small sample size, just five games against a primarily soft schedule, but here are five things we know about this 4-1 Kentucky basketball team:

1. This is an improved offensive team

According to Ken Pomeroy’s advanced analytics, Kentucky was 84th in adjusted offensive efficiency while stumbling to last season’s 9-16 record. This year, the Cats rank 12th.

Three-point shooting is one reason for the improvement. Last season’s team shot just 33.6% from 3-point range. That ranked 172nd nationally. The current Cats are shooting 37.8%. That ranks 69th nationally. Newcomer Kellan Grady is 12 of 22 for 54.5% from three. Davion Mintz is 5 of 11 for 45.5%. And Dontaie Allen has yet to find his stroke. Allen missed all five of his 3-point attempts in Monday night’s 86-61 win over Albany. He’ll heat up.

2. This is an excellent free-throw shooting team

Through five games, Kentucky has made 83.3% of its free throws. That ranks 11th nationally. Last year’s team shot 72.9%. That ranked 102nd nationally.

A persistent perception is Calipari’s teams struggle from the foul line. His 2008 Memphis team’s free-throw failures late in the national championship loss to Kansas fed the narrative. At Kentucky, however, that hasn’t always been the case.

True, this team has yet to face pressure-packed moments at the line. Still, it’s a good start.

3. The transfers are making a difference

These franchises, maybe more than any other two in the NBA, take the court with the ghosts of the pasts surrounding their iconic colors.

NEW YORK – Villanova and Syracuse stirred up memories Tuesday night of the old days of the Big East at Madison Square Garden when they would seem to always meet in the conference tournament, with the house split almost ...Read More

Figuring the opponent’s best chance was to bomb away from behind the 3-point line, the USC men’s basketball team employed tight perimeter defense and pounded the ball inside at every opportunity for easy layups to ...Read More