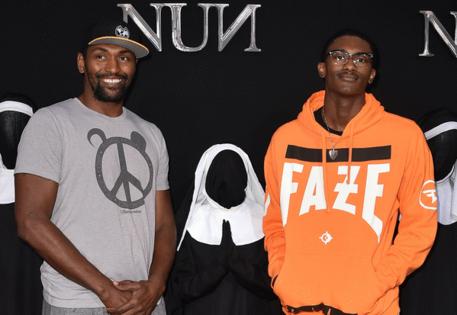 That time was in 2003, when Riley, now team president, was in the first of his coaching stints with the Miami Heat and Artest, then a defensive-minded instigator for the Indiana Pacers, was suspended by the NBA for shoving Riley during a courtside exchange of words between the two.

“He’s a helluva player, but he has got to get that under control,” Riley said in the immediate wake of that incident.

Flash forward 18 years, and there now is a chance for the son to rise in the Heat organization, with the Heat’s G League affiliate, the Sioux Falls Skyforce, announcing Tuesday the addition of Ron Artest III to their training-camp roster.

Artest III, a 6-foot-7 forward out of Cal State Northridge went unselected Saturday in the G League draft. The 22-year-old is one of 16 players listed on the Skyforce roster, including Heat two-way players Caleb Martin and Marcus Garrett. Garrett on Tuesday was sent to Sioux Falls, with Martin remaining with the Heat, traveling to Brooklyn for Wednesday’s game against the Nets at Barclays Center.

During his time at Northridge, Artest III spoke of his unique NBA upbringing.

Artest is one of two second-generation prospects on the Skyforce camp roster, with the team also bringing back Trey Mourning, the 6-9 forward who is the son of Heat Hall of Famer and current team executive Alonzo Mourning.

In addition to those two, and in addition to Martin and Garrett, the Skyforce roster also includes the four undrafted players cut at the end of Heat camp: Micah Potter, Javonte Smart, Dru Smith and DJ Stewart.

The lone NBA veteran in Skyforce camp is Brandon Knight, the point guard who played scholastically in Fort Lauderdale, Fla., at Pine Crest.

All players on the Skyforce roster, with the exception of Garrett and Martin, can be signed by any NBA team at any time.