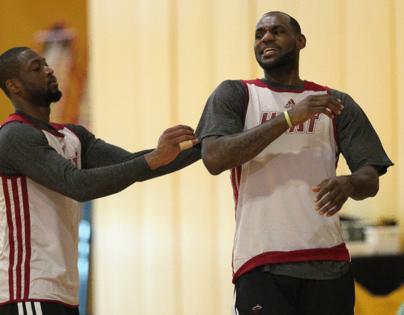 Former Heat players Ray Allen, LeBron James, Shaquille O’Neal, Gary Payton and Dwyane Wade all made the list of the greatest 75 players in NBA history, which actually included 76 players because of a tie on the ballot.

Allen signed with the Heat late in his career in 2012 and spent two seasons in Miami. He made what many consider to be the biggest shot in franchise history, when he hit a three-pointer with 5.2 seconds left to send Game 6 of the 2013 NBA Finals into overtime before the Heat eventually won the championship that year.

O’Neal, who spent most of his NBA career with the Los Angeles Lakers, spent part of four seasons with the Heat from 2004-08 and helped the organization win its first championship in 2006. He averaged 19.6 points, 9.1 rebounds and 1.9 blocks in 205 regular-season games with Miami.

Payton, known for his years with the Seattle Supersonics, spent the final two seasons of his NBA career with the Heat from 2005-07. His only NBA championship came with Miami in 2006.

Wade, who is widely considered to be the greatest player in franchise history, is the Heat’s all-time leader in categories like points, games played, minutes played, assists and steals. Among his most impressive accomplishments: Three championships with the Heat (2006, 2012, 2013), a Finals MVP award in 2006 and an NBA scoring title in the 2008-09 season.

“It’s surreal,” Wade said on the TNT broadcast as he was announced to the team on Thursday. “It doesn’t even feel real to look at yourself and say that I’m one of the best 75 players to ever play this game.

Bob McAdoo, who is currently working as a Heat scout, also was named as one of the 75 greatest players in NBA history.

Two notable Heat players who did not make the cut for the 75th Anniversary Team were Chris Bosh and Alonzo Mourning. Bosh was inducted into the Naismith Memorial Basketball Hall of Fame last month and Mourning was enshrined in 2014.

The names were not released in any particular order, with the NBA simply releasing the 75 greatest players in league history. The league’s 75th Anniversary Team was announced over three days, with 25 names announced on both Tuesday and Wednesday and the final 26 names announced on Thursday.

A panel of media, current and former players, coaches, general managers, and team executives from around the NBA selected the 75 greatest players of all time. Heat coach Erik Spoelstra and president Pat Riley were among those with a vote.

This week’s release of the top 75 players in NBA history comes 25 years after the 50 greatest players in league history were announced in 1996. The Heat was not represented on that top-50 list.

The league will celebrate its 75th season throughout the year, including at All-Star Weekend in Cleveland in February. Cleveland last hosted the NBA All-Star Game in 1997, when the league celebrated its 50th anniversary.