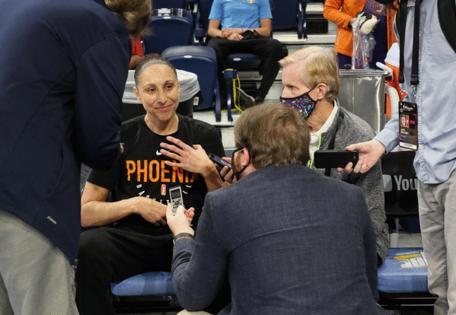 The Sky secured their glory after beating the Phoenix Mercury, 80-74, in Game 4 of the WNBA Finals at Wintrust Arena on Sunday.

The game was as grimy as you would expect any championship-securing game to be. But it also included tense moments between game officials and Mercury great Taurasi. Taurasi of course had been issued a $2,500 fine after shoving a referee in Game 2 at Footprint Center. She later referred to the fine as a charitable donation.

Taurasi apparently did not take the Finals loss too well. And after the team went back to the locker room with the Sky celebrating in the background, she allegedly broke a door, according to a report by The Next.

The Mercury players also did not participate in postgame interviews, which incurred the team a $10,000 fine for violating WNBA rules on media access, which the league announced Tuesday afternoon.

When asked about the alleged door incident in exit interviews on Tuesday morning, Taurasi neither admitted nor a denied the report.

“There’s a lot of doors in there,” she said.

But perched behind the DJ booth at the Sky’s rally was in fact a wooden door with what appeared to be a crack through the center of it. And Bally Sports writer Maggie Hendriks confirmed that was the door in question.

The Mercury may have closed out the season Finals runner-ups, but they’re still out for blood.

Skylar Diggins-Smith, one of the Mercury’s Big 3, declared a “championship or bust” mentality for the 2022 season.

For now, the Sky can bask in its well-earned flowers.

KISSIMMEE, Fla. — Bill Self prior to Sunday’s ESPN Events Invitational third-place game against Iona admitted being “excited” about getting a chance to coach against fellow Hall of Famer Rick Pitino for the first ...Read More