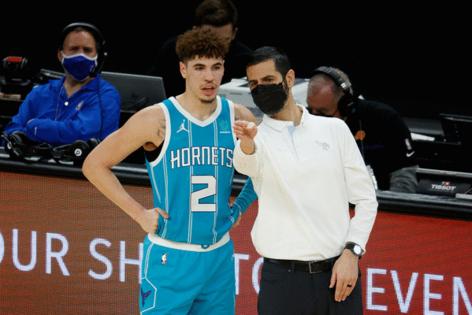 The Charlotte Hornets coach watched general manager Mitch Kupchak swing a trade to get Mason Plumlee. Then he happily witnessed James Bouknight get plucked off the team’s draft board at No. 11, followed by a heady trade by Kupchak to acquire another first-round selection to pick up potential sleeper Kai Jones.

Free agent Kelly Oubre chose Charlotte as his destination, giving the Hornets much-needed bench depth. And on top of all that, Borrego received a multi-year contract extension, keeping him around for the foreseeable future.

Unfortunately, there was one major subtraction many likely aren’t even aware of. Mike Brown, a legendary high school coach in Borrego’s native city of Albuquerque, N.M., died in June at age 75. Brown coached Borrego at Albuquerque Academy and Borrego remained close to him and his entire family, including Brown’s son Danny.

Brown attended a few Hornets’ games to get an in-person glimpse of Borrego roaming the sidelines during his tenure here, something that was a blast for both of them.

“Well, Coach Brown played such an instrumental role in my development and my growth as a young man, even more so than basketball,” Borrego told The Charlotte Observer. “Just how to grow up and make good decisions on and off the floor. And he really taught me the game by (showing me) how to be a man. And he was a great role model for me. He showed me how to be a great husband, father, where your priorities should lie. I always saw that and I always valued those same traits that he carried with him as a coach, but also as a man and as a father.

“I was thankful that I had this much time with him, and that he got to see me reach this point today. I know he was extremely proud of where we are at today, and I wouldn’t be here today without him. Obviously, we miss him and he’s meant so much to me. But I got to spend a little bit of time with him before his passing. He will always be with me and I shared that with him in one of our last conversations. I’ll always carry those values and those traits with me as I carry forward.”

With just days remaining until the start of training camp next week, Borrego spoke exclusively with The Observer about a variety of topics, including increased expectations, organizational stability, the fans’ eagerness for the season to begin and more.

— Roderick Boone: Did you ever stop for a moment to take in the journey you’ve been on over the last few years, particularly after receiving your contract extension early last month?